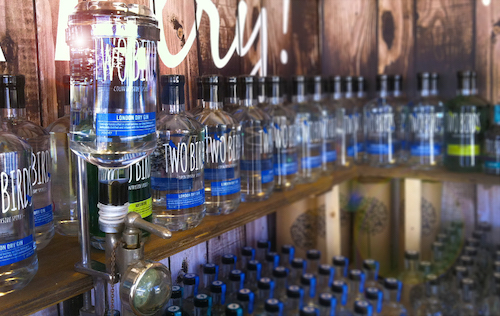 It’s good to be able to report on what seems like a burgeoning craft spirit scene in the area. Joining Charnwood-based GFC member 45 West, distiller of Burleigh’s Gin, is Union Distillers in Market Harborough, maker of Two Birds gin.

Founded by Leicestershire man Mark Gamble, the company launched its gin in 2013 and was immediately named UK Craft Gin of the Year. There’s a further local link too, with water from Charnwood Forest going into the spirit.

Gamble came to distilling relatively late in life. “I wish I’d done it years ago!” he told GFC. In truth before 2007 it was extremely difficult for small producers to get a licence. “They made you jump through all sorts of hoops,” he explains. “You had to have large stills of a specified size and produce so many hundred hectolitres. But that’s changed and there’s really nothing to stop anyone now.”

These changes have provided a big boost to the craft distilling movement, which parallels the changes in brewing in recent years, and this is a wave Two Birds is surfing. Gamble produces small batches of 100 bottles, meaning he can keep close control over quality and consistency.

You’ll find a huge range of gins in supermarkets these days but they continue to be dominated by the big players, and craft distillers like Gamble steer well clear. You can, though, find Two Birds in independent outlets in Market Harborough and in a few delis and farm shops around the region. Look out, too, in some upmarket pubs and bars, with Two Birds being an increasingly popular choice for cocktails.

Flavour-wise Gamble is reluctant to talk specifics though others have picked up orris root, coriander and citrus. “Obviously, we’re juniper-led or else we wouldn’t be a gin but while we could talk as distillers about flavours, that would be just our view – everyone’s tastebuds are different and people will pick out different things. The key thing is people understand the style and category of gin.”

In the case of Two Birds that currently means a London Dry, but later this year it will be releasing a sweeter Old Tom-style gin and also a double-wooded sipping gin, basically cask conditioned like a whisky and a rare style today but one that harks back to the 18th century and the early days of ‘mother’s ruin’.

For further information and to buy online at £28 a bottle (plus delivery) visit www.twobirdsspirits.co.uk, where you can also find details of Two Birds vodka and, coming in at a fearsome 70%, its version of legendary French spirit absinthe.