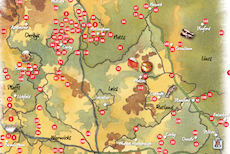 Our map of 161 Midlands breweries

In February 2012 we published our first Midlands Brewery Map and, with the help of Nottingham CAMRA, we’ve now updated it for summer 2013.

As of June 2013, the map shows 161 beer producers – from tiny to large – scattered over the area we cover as Great Food Club – an area that can broadly be defined as ‘The Midlands’.

Our first Midlands Ale Map, compiled in January 2012, showed 116 breweries, so around 40 have launched since then. Can the growth continue at such a fast rate?

This map is printed in the Great Food Club Handbook 2013/14. Click here to get your copy.