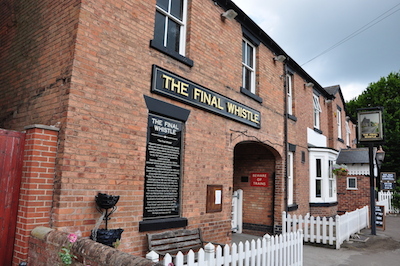 A trip to the Final Whistle, Southwell, Nottinghamshire

Ollie and Jo Brown and their daughter Charlie have finally come home. At least, that’s how it feels. The new landlord and landlady of the Final Whistle in Southwell, Notts, have been itching to take on this extraordinary pub for many moons. Ollie and Jo’s family have run it for years and now the couple have moved in to continue all the good work. 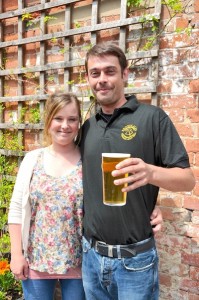 And you get the feeling they’ll enjoy life here for a long time. Twelve-year-old Charlie has enrolled at Southwell’s Minster School and her mum and dad couldn’t be happier in their new roles. Ollie hopes to install a new microbrewery in a pub outbuilding and Jo says: “I love it here – the town is so lovely and the pub is beautiful, but best of all, it’s just so sociable. You meet so many different characters and learn so much from what they tell you about their lives.”

The prize for their hard work is The Final Whistle, which is a unique and memorable pub. It’s on the site of an old railway line – closed since 1968 and now a well-loved nature trail. The line once linked Southwell to the Midland railway network. A railway theme runs cleverly throughout The Final Whistle, from the booth near the bar that looks like a first-class carriage to the beautifully constructed mock platform that makes up most of the patio. 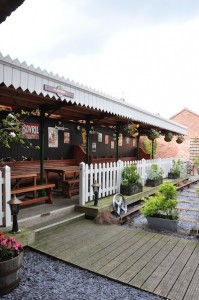 A mock train platform sits on the pub’s patio

So it’s no surprise that this delightful pub has many fans who love not only its look and feel, but also the spectacular beer selection: there are no fewer than 10 regularly-changing cask ales. And Ollie wants to improve things yet more. In addition to his dream of installing a microbrewery, he’s aiming to add four new beer lines devoted to craft ales. He is also in the process of putting his own stamp on the beer selection: “I’m bringing more variety to our beers by introducing different styles and strengths – I plan the pumps meticulously so there’s always a dark beer, a strong brew, a pale ale, an amber one… the full cross section. And there’s always at least one pump dedicated to a very local brew.”

Ale aficionados will be pleased to hear that Ollie knows what he’s talking about. While working at The Chesterfield Arms he was awarded the title of Best Kept Cellar in the East & West Midlands at the Great British Pub Awards, eventually finishing runner-up in the UK. Ollie is passionate about beer and he’ll be a happy man if his microbrewery comes to fruition. “I’d like a two-and-a-half barrel plant to brew exciting, experimental beers,” he says. Ollie’s elder brother James runs 10-barrel brewery Brown Ales of Clay Cross, so he won’t struggle if he ever needs advice. 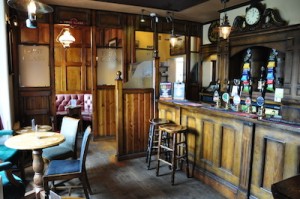 But The Final Whistle isn’t all about beer and trains. Jo, who studied fine art at university, is bringing that all-important woman’s touch to the pub. She’s hired more female staff, is encouraging more women to visit, and her presence is providing balance. She also has plans to introduce a little more variety to the bar snacks menu, although she is keen to point out that The Final Whistle will always be a beer-led pub.

And it’s highly appropriate that top-class ale will continue to be the focus of The Final Whistle’s new landlord and landlady. The couple’s eyes first met over a barrel of beer in 2007 when Jo started work at the Brown’s old family pub, The Dead Poets Inn at Holbrook near Belper, when Ollie was training her how to manage the beer cellar. They haven’t looked back.