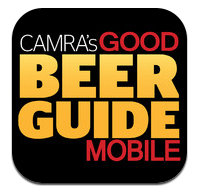 Throughout this week we will be reviewing interesting mobile apps for food lovers as part of National App Week. No, we didn’t know App Week existed until yesterday, either – but apparently Britain is considered to be the world’s best when it comes to app development, so that’s a good enough reason for us.

What does it do?
To put this app into context, the Campaign for Real Ale(CAMRA) is an independent, voluntary organisation campaigning for real ale, community pubs and consumer rights. CAMRA was formed in March 1971 by four men from the north-west who were disillusioned by the domination of the UK beer market by a handful of companies pushing products of low flavour and overall quality onto the consumer. The product of the combined efforts of thousands of CAMRA volunteers, this app is an independent guide to 4,500 of the best real ale pubs in the UK and information on every real ale brewery currently operating and their key beers.

What’s good about it?
It’s cheaper than the paperback equivalent and easier to cart around. You only need to be online to download updates or to search for a pub, all the other data is stored on the app. This is great if you’re choosing an ale in a pub with no WiFi and the app includes unique tasting notes for regular beers, written by trained CAMRA testing panels.

What’s bad about it?
Like the Good Pub Guide, this app includes full details on opening hours, food, accommodation, but doesn’t review the pubs themselves quite so thoroughly – the focus here is on the beer. Some compatibility issues have been reported with the iPhone 5 and viewing the app in landscape mode, but the developers seem to be on top of ironing out any issues as they arise.

Verdict:
This is the complete package for pub-goers with a passion for real ale and once you get to know the icons used, it’s a good quick reference guide.

The CAMRA Good Beer Guide is available for free on the iPhone, iPod Touch and iPad. Download it here