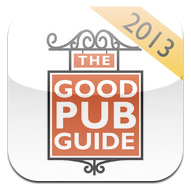 Throughout this week we will be reviewing interesting mobile apps for food lovers as part of National App Week. No, we didn’t know App Week existed until yesterday, either – but apparently Britain is considered to be the world’s best when it comes to app development, so that’s a good enough reason for us.

What does it do?
Described as ‘invaluable’ by The Sunday Telegraph, The Good Pub Guide is an independent guide to the best pubs in Britain. The app contains everything in the book but allows you to search easily for pubs by proximity, postcode and by name. It also enables you to share content with your friends, which is particularly handy if you’re arranging to meet on unknown territory – no more flicking between Google maps and your text message while you try to memorise the postcode. You can use it scour thousands of pub reviews and if that makes you thirsty, the GPS feature will guide you to the nearest pub.

What’s good about it?
This app has some great features. You can use the ‘pub plotter’ to plan your pub escapades with military precision. The ‘near me’ feature will find the closest pubs and there’s even a ‘lucky dip’ feature to help you find pubs that have been reviewed positively by committee. Despite featuring thousands of pubs, this is still a very detailed guide with images, phone number and opening hours. The user interface is visually impressive with colourful maps, moveable icons and handy markers to indicate which pubs are ‘Good Pub Guide’ approved. Overall, this app’s about honest and entertaining content and perhaps that’s why it’s so popular.

What’s bad about it?
Unlike a lot of apps, it’s not free (it’s £4.99) but it is a considerably cheaper than the book. Also, some features are a work in progress for example not all pubs have reviews and or images, so there is a feeling of work in progress.

Verdict:
This is a bit pricey for an app but definitely worth the cost. It does feel a little incomplete but it’s also only the first stage of what the Good Pub Guide team hopes to offer on mobile devices. We look forward to seeing how things develop.

The Good Pub Guide 2013 is available for £4.99 on the iPhone, iPod Touch and iPad. Download it here