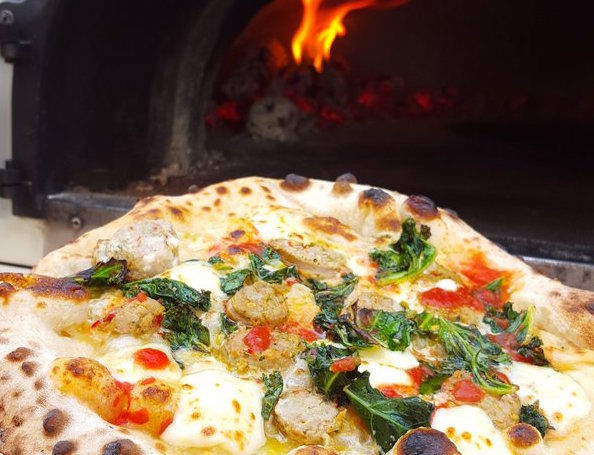 Pizza by the Rustic Crust of Nottinghamshire

Beer and street food at the local: a match made in heaven

There’s no doubt that some of the most mouthwatering and creative food available today is prepared and served by mobile traders. You only have to look at the popularity and quality of street-food markets like Digbeth Diner in Birmingham or Dalston Yard Street Feast in London to see how far the mobile food scene in the UK has come since the days of limp burgers in lay-bys.

Here’s another fact: the finest ales, craft beers and real ciders are to be found in pubs. Properly cared-for cask beer and real cider need the loving care of an expert cellarman to be at their best.

It’s not much of a jump, therefore, to suggest that many pubs and their customers would benefit from the presence of street food traders, especially when the pub focuses on drinks rather than food. Who needs a kitchen and a team of chefs when you can invite someone else to serve amazing, creative food from a van in the car park?

One of the best local examples of a successful street-food/pub partnership in action can be seen at The Crown in Beeston, Nottingham. The Crown – owned by Everards Brewery and operated by Brown Ales of Chesterfield (another example of a mutually beneficial partnership, incidentally) – is an ale emporium that serves 14 cask beers. For the past few years, the pub has been putting on around 15 beer and food festivals per year on weekends throughout the summer.

The Crown is a traditional ale pub and does not serve food day to day, and Paul is certain that the presence of the varied pop-up restaurants has been excellent for both business and for customers. He says: “The festivals have been brilliant and a godsend during the extensive tram system work that has hit Beeston recently. Our street-food partners have been a vital component – their presence makes the events more family friendly, pulls in more people and encourages customers to start arriving from 5pm in the knowledge they can sit down and eat a great quality meal.”

And now planning permission has been granted for a permanent outside bar and shelter at The Crown, which will replace the marquee under which previous festivals took place. The new facilities – being built by Everards in partnership with Brown Ales – will extend the number of festivals that the Crown can run each year.

Paul explains: “Putting in a permanent outside bar and shelter means we can improve our beer and food festivals and run them more often. Everards have been fundamental in ensuring this building project goes ahead – they have been the best partners we could hope to work with.”

Another beer-led Nottinghamshire pub that has started to successfully experiment with street food is The Brown Cow in Mansfield. The multi-award-winning pub – run by Raw Brewing in partnership with Everards – has teamed up with local mobile trader The Rustic Crust to offer customers artisan pizza on Sunday evenings once a month.

Landlady Nicola Thompson, who runs The Brown Cow with Chris Johnson, says: “The couple who run The Rustic Crust are regulars and suggested it might be a good idea to bring their converted Land Rover Defender, which houses a pizza oven, to the pub car park. We agreed. The Rustic Crust coming here has given us and our customers a real boost.”

“We share the same philosophy as The Rustic Crust. They are local artisan producers who use raw ingredients from the locality; we serve locally brewed, artisan beers, so it makes even more sense to team up.”

Fantastic street food and wonderful beer is a match made in heaven. Let’s hope more pubs and mobile traders cotton on soon.