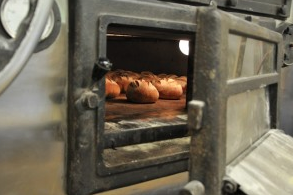 On December 21, 2012, Rutland’s Hambleton Bakery was crowned Britain’s Best Bakery in ITV1?s show of the same name. Earlier in the year we visited the Hambleton team to find out why bread is topping the schedules…

Wisps of wood smoke melt into the morning mist and we are greeted with warm smiles and a crackling fire in the former hunting lodge sitting room at Hambleton Hall, overlooking Rutland Water.

Tim Hart, owner and co-founder of Hambleton Bakery, explains that artisan bread is undergoing a resurgence. The bread they make today at Hambleton Bakery has exactly the same properties as the bread that was made 200 years ago in the area. Hambleton’s Local Loaf – one of many types of loaf made by the bakery – uses stoneground flour milled by a local windmill. The dough is fermented using beer barm (ale froth) from Grainstore Brewery, Oakham. Then the bread is hand formed and left to prove in willow baskets before loaves are turned out into the woodfired oven. 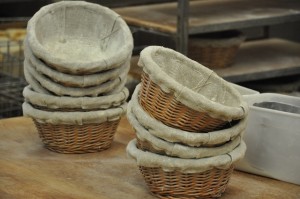 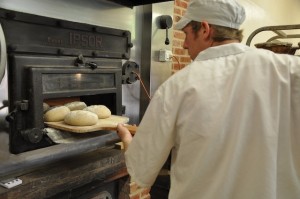 Tim is justifiably proud that in three years Hambleton has grown to have four outlets: Exton (where all the bread is baked), Stamford, Oakham and, most recently, Oundle. The bakery also supplies several restaurants and sells bread through lots of local delis and farm shops, including Gonalston Farm Shop in Nottinghamshire, and Farndon Fields Farm Shop in Market Harborough, which is the most recent addition to Hambleton’s portfolio.

In Britain today, the vast majority of bread is baked in factories via the Chorleywood Process, where degraded flour is combined with high doses of yeast, resulting in accelerated fermentation. Making a loaf like this takes about 90 minutes from start to finish. Numerous chemicals are also added, designed to inflate, moisten and preserve the finished product. “This tasteless commercial bread has dominated for too long,” says Tim. “It’s a national disgrace.” 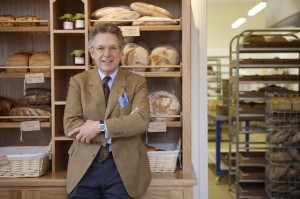 Before the mid-19th century, when Louis Pasteur discovered that fermentation was caused by living organisms – namely yeast – the bread-making process was a mystery. But bakers did know that it was possible to make bread in two ways – by the sourdough method, which allows a flour and water mix to ferment naturally, or by the beer barm method.

Hambleton makes bread using both techniques. The sourdough method, Tim explains, was not common in England. “Our historical digging showed that in pre-industrial Britain, bakers simply went to the local brewery to borrow some froth off the top of fermenting beer and made a starter with that, which is exactly what we do for what we call our Local Loaf.”

Meet the baker
Head baker at Hambleton is Julian Carter, who used to be Hambleton Hall kitchen supremo Aaron Patterson’s sous chef. Before that he was a chef with the RAF. “When Julian decided to return to his roots to bake, I was excited by the possibility of making traditional bread for Hambleton Hall and our Nottingham restaurant, Hart’s,” says Tim. “Julian is the fourth generation of eldest sons to become bakers.” 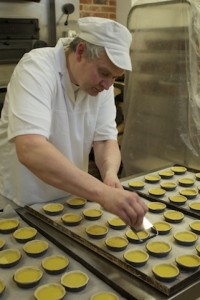 It’s a ten minute drive from Hambleton Hall to Hambleton Bakery’s Exton headquarters. Sunbeams bounce off the water as the road winds east around the reservoir. We arrive. The grandeur of the Hall is far behind. This is humble. Overlooking a meadow, the green door of a once-abandoned electrical substation opens and fresh baked bread smells escape. Bright strip lights hang from magnolia ceilings. The Spanish-designed woodfired Ipsor oven is set in traditional red bricks and radiates a constant heat, while all around baked goods are stacked waiting to be taken to their next destination – trolleys crammed with tarts and shelves heaving with baskets of proving sourdough. 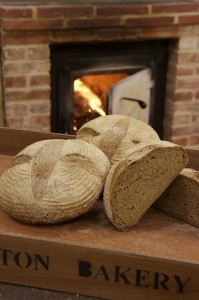 Julian Carter is deftly filling a sea of pastry cases with custard. He doesn’t spill a drop. They are Portuguese egg custard tarts. He talks quickly, with a soft accent gained from his home city of Liverpool. “The slow fermentation of our bread encourages the development of lactobacilli, which in turn creates lactic acid. It is this acid that is responsible for the slightly sour taste of sourdough bread.” The bread itself is renowned for keeping well. Lactic acid is an effective mould inhibitor which means it lasts up to a week. 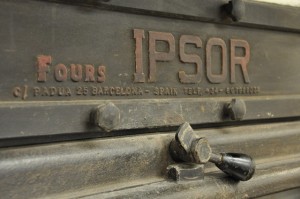 Julian moves over to the oven and opens the lower cast iron door. There is a blast of warmth and I glimpse hot ashes. He loads logs while telling me that the oven itself was sourced from Barcelona. Julian seems unconcerned by the intense heat. “It’s a rotary oven and costs just £14 a day to run,” says Julian. “Using one of these is not just about fulfilling a romantic notion of baking, there are practical considerations as well, and one of those has to be cost.”

Hambleton Bakery’s success proves that artisan bread is indeed undergoing a resurgence. But why?

Tim explains: “Our bread has sold well because it’s a small treat. It might be twice as expensive as supermarket bread but it’s still the same price as a cappuccino and lasts all week.” Then there are less hard-headed reasons. Bread like this is everything we once lost. It is our culinary heritage and its return feeds the soul as well as the body. 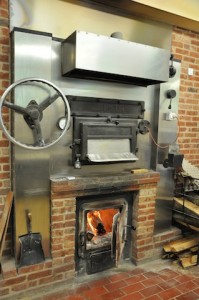 Hambleton’s giant oven
The woodfired oven at Exton is three metres in diameter, big enough to bake 50 loaves at a time. It is powered by ash and beech logs gathered at local forests, which would otherwise go to waste. It bakes up to 500 loaves a day and gets through 11,000 logs per year. The temperature inside never drops below 200C and if left, the oven would take three weeks to cool down. Hambleton bakes every day except Christmas day.