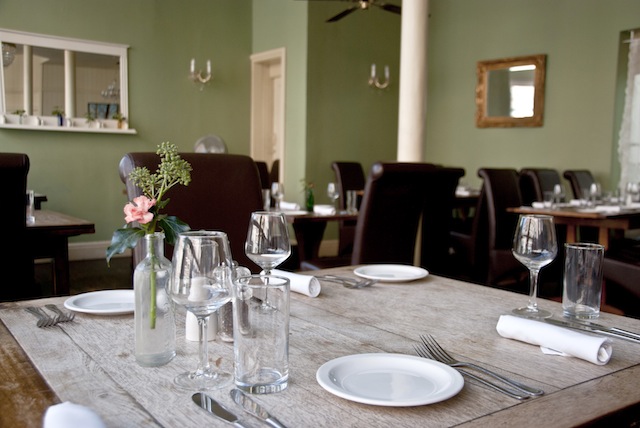 Last Saturday I was in Nottingham with my wife and 15-month-old son, and popped in to the Larder on Goosegate.

This is a fascinating restaurant: located on the first floor of a Victorian building on a street called Goosegate in Nottingham’s city centre, one side of the dining room is almost entirely glass, so you get a great view of the street below and can relax and take in Nottingham’s eclectic mix of shoppers, sports fans, skateboarders, ne’er-do wells, professionals, fashionistas and goths (Goosegate is in Hockley, which has a slightly bohemian air).

The interior is a glorious mish mash of old tables, stripped wood floors, fantastical chandeliers, vintage teapots and reclaimed 50s radiators, and they’ve all been assembled by someone with a good eye for interior design. Metal pillars lend a slightly industrial air and it’s a spacious place. The icing on the cake is that the Larder was Jesse Boot’s first apothecary over 160 years ago (Jesse founded Boots the chemist), so it’s an important part of Nottingham’s landscape. 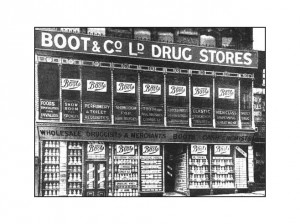 How the Larder used to look in Jesse Boot’s day

I’d been keen to visit this restaurant for a while as I’d heard good reports from Great Food writer Erin Huckle of Experience Nottinghamshire; also, during the previous week, owner and head chef Ewan McFarlane had run a half-price offer to members of my Great Food Club scheme. (I was pleased to hear that the offer went nicely for both GFC members and the restaurant – “It worked really well,” Ewan told me. “It added 40 covers on a traditionally quiet week.”)

On to the food… 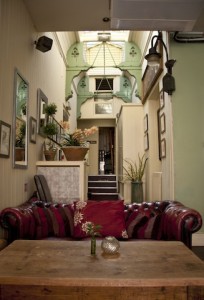 When the food arrived none of us were disappointed. My wife’s wild garlic and potato soup was loaded with swirls of beautifully fresh, pungent leaves. My toasted sourdough with charcuterie from Trealy Farm (Wales) was rustic and packed with mouthwatering, salty, meaty flavour. My main – a chunk of cod loin on a bed of lentils – was cooked to perfection, delicate and superbly moist.

Pudding was excellent too: cinnamon parfait and plum compote is a great combination. 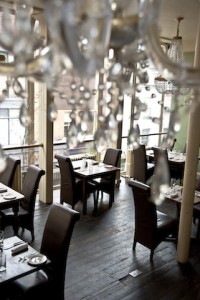 My visit suggests that at the Larder you can be sure of soaking up some inventive flavours and enjoying top quality ingredients cooked well. And while doing so you’ll be lulled into a state of relaxation (wine helps here) as you take in your surroundings, reflect on the building’s history, and look down onto Goosegate at Nottingham’s comings and goings.

While we ate, lots of people were enjoying afternoon tea and cakes, sipping from vintage cups, so if you like this traditional British activity, it’s a great way of introducing yourself to the Larder. There is also a fabulous looking steak menu here, offering cuts different to the norm, such as pavé and picanha.

As an aside, as I was leaving Nottingham, I spotted an enormous queue of Nottingham Panther ice hockey fans. Following the snake of people, at its end I saw local butcher (and ex ice hockey player) Johnny Pusztai running one of his renowned BBQs. If you’re not aware of Mr Pusztai, his butchers shop is well worth a visit.

The Larder on Goosegate is now part of Great Food Club