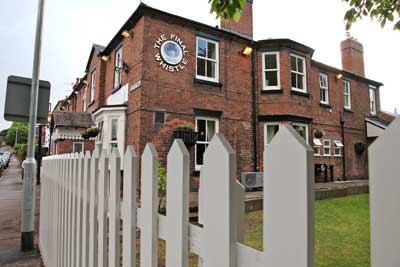 Blog: why some pubs succeed and others fail

Last week I visited a new microbrewery in Chesterfield called Brown Ales. Founded by James Brown and his father David, the brewery has sprung from the pair’s highly successful pub business. The Browns operate The Chesterfield Arms in Chesterfield, The Crown in Beeston, The Final Whistle in Southwell, and they are about to open a fourth pub – The Sir John Borlase Warren in Nottingham city centre. All four pubs focus on offering a big range of cask (and a few keg) beers, all are award winning and all are thriving.

According to Camra, UK pubs are closing at a rate of 18 per week. So what is it that allows the Browns to run profitable pubs while others fail?

Talking with James Brown, some answers to started to appear…

“Everards Brewery own all four of the pubs we operate,” says James. “They are brilliant to work with – they are fair, they listen, they are supportive [James mentions legal and HR help in particular] and they care about pubs and beer.” 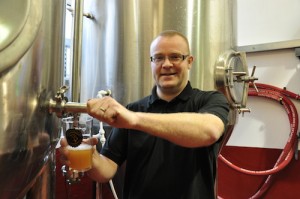 2) The pub operator and their vision.

“We ran a restaurant and wine bar in Derby for a few years, which taught us you need a clear focus for your pub or restaurant. You need to do one thing well and focus on that. We focus on serving really great beer and providing a place where people can meet up and chat. Lots of places try to please everyone and end up pleasing no one. They have a fruit machine, a few lagers, loud music, a few bitters, sport on TV and average food. When planning the pubs with Everards, we said we don’t want a gaming machine, we don’t want a TV, we only want a bit of background music, and we only want to offer sandwiches and cold snacks. But we do want to serve over 10 different types of cask beer and we do want to have well trained, efficient and welcoming staff who understand what we are trying to achieve.”

“Lots of pubs have terrible lighting – it’s far too bright. As a result the atmosphere isn’t relaxing or welcoming. We try to create a nice atmosphere where people feel happy and relaxed. In partnership with Everards, we’ve also put a lot of effort into interior design. For example, in The Final Whistle we feature some orginal train track, and in The Chesterfield there is some lovely dark wood panelling and Chesterfield-style, buttoned leather seating.” 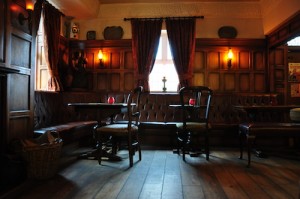 Clearly this is important – for example, a wet-led pub located in an area densely populated by non-drinking Muslims would probably struggle. However, there are several examples of pubs that were assumed to be doing badly due to location, but which then thrived after being run differently. For example, The Greyhound in Burslem, Stoke on Trent, was on the verge of being boarded up until Everards and Titanic Brewery took it on.

James also told me about the factors that he believes are combining to give pubs a tough time at the moment. “Lifestyle changes are having an impact. A few years ago people didn’t have Skype, social media, iPads, smartphones and TV on demand. All these things make it less tempting for people to go out to the pub to socialise. In all honesty there are probably too many pubs in the UK for the technology age we now live in, so badly run ones will continue to close until the right level is reached.

“Also, some pubcos who don’t treat their tenants fairly have a lot to answer for. Their excessive rent demands, high beer costs and unsupportive approach make it impossible for some business owners to earn a living. 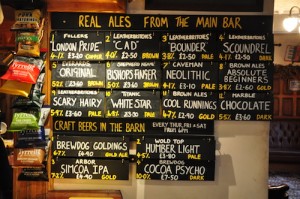 Just a few of the beers available in The Chesterfield Arms

“And in terms of tax, the odds are stacked against pubs. Supermarkets have a far easier time of it tax-wise and have become too powerful. They are also able to sell beer more cheaply than pubs.

“Business rates are infuriating for pubs too – unlike other retail outlets, pubs get slapped with higher business rates the more successful they become. It’s unfair and needs to change – I would love Camra to campaign on that issue.”

The Browns are succeeding with their pubs – in two cases they quadrupled turnover in just a few months of taking over. Despite all the doom and gloom surrounding pubs, a great deal can still be achieved under the right circumstances.

Maybe in addition – or instead of? – to the Camra campaign to save our pubs, a campaign to educate pub operators on how to run their business more effectively is needed.