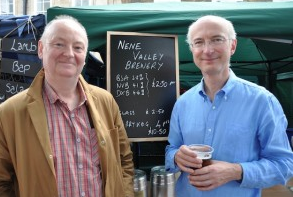 Brewing returns to Oundle after 50 years

After exactly 50 years to the day, the official opening of Nene Valley Brewery marked the return of beer-making to Oundle. Brewing has been absent from the Northamptonshire market town since the closure of Smith’s on September 19, 1962.

Hundreds of people joined partners Rupert Farnsworth, Dick Burnett and Dave Simpson to celebrate the opening of the refurbished site at Oundle Wharf. Brewing expert and general manager of Smith’s when it closed, Jim Irving, was guest of honour.

The sprightly 92-year-old gave a fascinating potted history of brewing in the town, which dates back to the 15th century.

“You can imagine my great delight on being invited to welcome the industry back to Oundle after an absence of 50 years,” said Jim as he declared the premises officially open. “May they be as successful as the Smith family in whose footsteps they tread.” 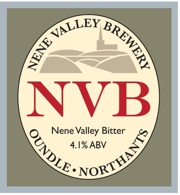 “We started a year ago in a shed in my garden,” said brewer Dick Burnett, which makes the silver medal they won for their Jim Irving Ale (brewed in honour of the great man himself) at the 2012 Peterborough Beer Festival an even more impressive achievement. “It’s been an exciting project and the building is now an eye-catching welcome to the town,” added Dick. The site had for many years been a vacant, home to a run-down, old warehouse.

The brewery’s three regular beers are Nene Valley Bitter, Blond Session Ale and DXB – Special Bitter, which can be tasted and bought at the brewery’s retail outlet, as well as some very interesting beers from other producers. NVB and BSA are available in 500ml bottles and all are available in various sizes up to a 72-pint firkin, or in a growing number of pubs. 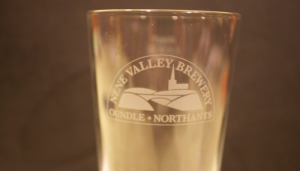