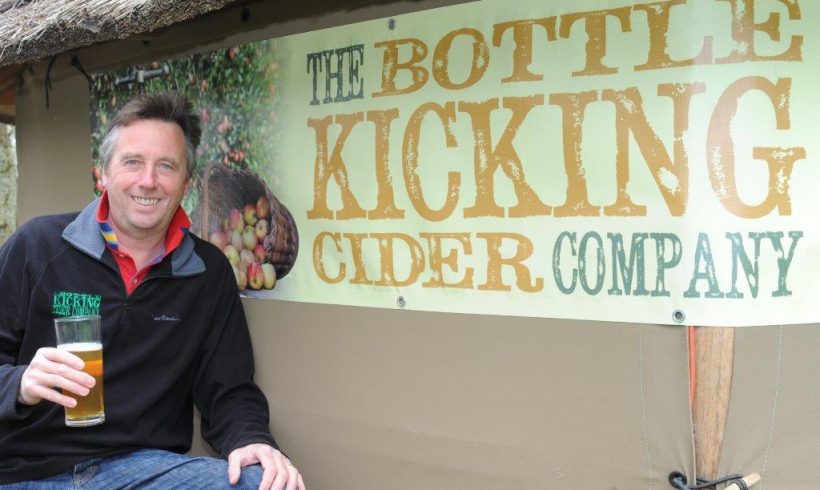 Every Easter Monday, cider-maker Rob Morton and his wife Tracey quietly sip their latest brew while watching grown men wrestle just beyond the end of their garden.

The turf they look out upon in Hallaton, south-east Leics, has hosted the same mass brawl annually for 200 years, although the origins of the spectacle are thought to stretch back more than 1,000. Called the Hallaton Hare Pie Scramble and Bottle Kicking, it is a good old fashioned scrap between the neighbouring villages of Hallaton and Medbourne. The aim is to force three 5kg bottles over your village’s ‘try’ line. Each try line is a stream, and each stream is 1.6km apart. It’s best of three and the only rules are no eye-gouging, no strangling, and no weapons.

This eccentric ceremony – which also includes the distribution of a hare pie – is the inspiration behind Rob and Tracey’s Bottle Kicking Cider Company, which was launched from their Hallaton farmhouse in 2012.

“In many ways, the Bottle Kicking gave birth to my cider company,” says Rob. “The event ties in perfectly with cider making: it takes place at the start of spring each year – traditionally when the cider from last year’s apples is ready to drink. Also, the Bottle Kicking is an ancient English custom, and so is cider-making… And drinking.”

Rob’s ciders are made using traditional methods from Leicestershire apples blended with Gloucestershire cider apples. They have the complex flavours found in English farmhouse ciders along with almost-dangerous drinkability, which has resulted in Bottle Kicking Cider gaining many fans. Going from strength to strength, Rob has built up an impressive customer base, including Leicestershire’s biggest brewer and pub owner, Everards.

Share your experience of The Bottle Kicking Cider Company