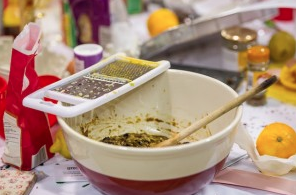 “I taught 70 wonderful ladies to make this perfect yet simple and full-of-flavour pud!” says Carmela. “It’s my own recipe and even if you don’t like Christmas pudding, I challenge you to make this. You will love it, I’m sure – it can’t be beaten! So please enjoy, from me to all Great Food readers. Merry Christmas!” 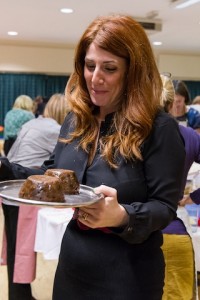 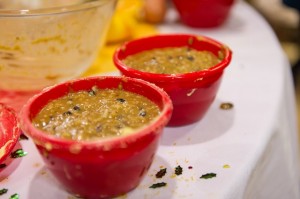 1. Pop the currants, sultanas and snipped prunes into your mixing bowl with the rum. Swill the bowl a little, then leave to steep for at least five hours, or overnight if possible, covered with a tea towel.

2. Grease your pudding basin with a little butter, just so you are now prepared for the plump filling.

3. In your mixing bowl, combine all the remaining pudding ingredients, either in the traditional manner, or just any old how. Fold in your cola-cleaned coins or heirloom charms that you have bought with you (careful when it comes to eating!). Scrape and press the mixture into the prepared pudding basin, squish it down and put on the lid.

4. Wrap and cover the pudding with a layer of baking parchment and a layer of foil. Both the parchment and foil must have a pleat (see tip, below). Tie with string so the basin is watertight.

5. Steam your pudding basin in a pan of boiling water (to come halfway up the basin) or in the top of a lidded steamer (this size of basin happens to fit perfectly in the top of my all-purpose pot) and steam for three and a half hours, checking every now and again that the water hasn’t bubbled away.

6. When it’s had its steam, remove from the pan, allow the pudding to cool and then place somewhere out of the way in the kitchen until Christmas Day. I wrap mine in a tea towel.

7. On the big day, rewrap the pudding and cover again with fresh foil and parchment (still in its basin) and steam again, this time for an hour. Merry Christmas to you all. 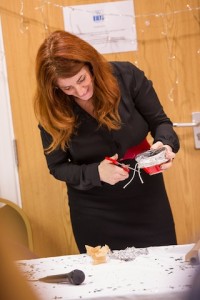 Tip: making a pleat
Take a large sheet of foil and place a large sheet of baking parchment on top. Make a pleat by folding a crease in the centre of both the parchment and foil. Turn onto pudding, parchment side down, and press around the bowl. Tie tightly with a long piece of string, under the basin’s lip. Trim off the excess foil and parchment, leaving about 6cm. Tuck the paper up and fold the foil around to make it watertight.