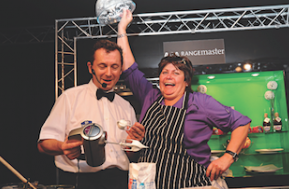 The ninth East Midlands Food and Drink Festival took place on October 6-7 at Melton Mowbray Cattle Market and everyone got a Festival Special copy of Great Food Magazine on the gate.

We were exhibiting at the event and signed up 180 new members to Great Food Club.

Attendance numbers were up 25% on last year to an estimated 12,000 (source: Kenyon Communications) and there were over 45 new exhibitors.

Matthew O’Callaghan, chairman of event organiser The Melton Mowbray Food Partnership, said: “This has to be one of our best festivals ever. There was a very good footfall, with producers saying that despite the recession people were prepared to pay for quality produce. Some had all-time record sales. We can look to next year, our tenth anniversary with confidence and a job well done. Kenyon Communications, our coordinators, have done a fantastic job in building the festival up to what it is now.”