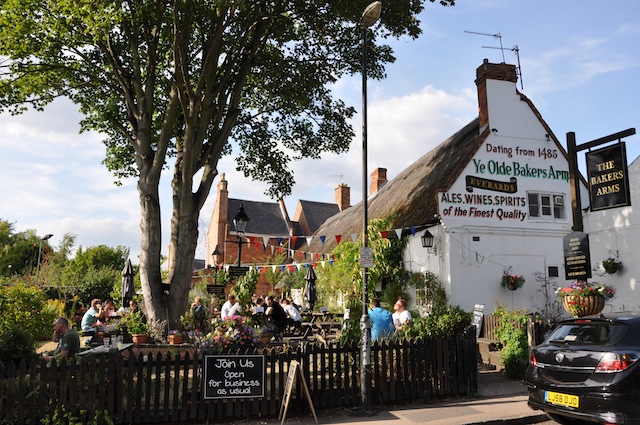 “We source locally from artisan producers.”

It’s a claim that everyone from Michelin-starred restaurants to roadside hotdog sellers makes these days. The words have been used so often and stretched to fit so many scenarios that they’ve become mangled, their true meaning lost behind a confusing patchwork of vague concepts and half truths. It’s a bit like when you say a word to yourself over and over again: it loses meaning and starts to sound plain odd. What is an artisan producer anyway? And why should buying from one who lives locally be a good thing?

One pub that answers these questions beautifully and brings new clarity to the phrase heading this article is Everards pub, The Baker’s Arms in Blaby, Leicestershire. The Baker’s has gone from a struggling boozer to a bustling, cherished and historic local pub with a reputation for good food and drink in 18 months. The secret? A genuinely local, artisan sourcing policy. OK, OK, so you’ve heard that claim before. What does it actually mean in reality? And why has it led to success?

“To us, running an artisan pub means simply working very closely with good local tradespeople, whether they’re food and drink producers or other suppliers,” says Baker’s Arms licensee Chris Smart. “We’ve made a big effort to do that, and that’s why The Baker’s has taken off so quickly – because we’ve involved lots of different groups of people who live in or near the village of Blaby.”

This simple approach might seem at odds with the confusing mystique attached to the term ‘artisan’ in the 21st century. Arguably, the word has been hi-jacked by marketeers wanting to add romanticism to brands by conjuring up certain images. You know the sort of thing: moody French bakers making award-winning croissants with one hand while painting impressionist masterpieces with other other. But the dictionary definition is less flowery: an artisan is a skilled tradesman. Nothing more, nothing less.

When Chris says he’s made an effort to form working relationships with skilled local tradespeople he doesn’t mean putting in a quick phone order with a random village supplier. He means putting this approach at the heart of everything he does.

When Chris arrived, the pub’s bakehouse, which dates back to the 15th century, was used as a messy storeroom. He cleaned it up and turned it into an historic asset. Spurred on by Everards’ Project Artisan scheme, he then tracked down a Leicestershire-based bread-making enthusiast and started to put on a monthly baking school in the middle of his pub.

Chris explains: “People came to the bread-making classes, then they would tell their friends, who would come for dinner. We also contacted the local farm to source our jam, honey, fruit and vegetables. The same farm runs projects for disabled kids, and we invited them to hold their meetings and events in the Baker’s. Word spread among the local community.” Chris found that by developing positive relationships with good quality and genuinely local businesses – and involving the Baker’s in their projects, often in a way not normally expected of a traditional pub – his business started to snowball.

“By working closely with artisans, you turn the pub into a community hub,” says Chris. “The pub gets busy, but in a natural way, without the need for advertising. The artisans and their friends do all the advertising for you through word of mouth.”

Another initiative Chris came up with was to invite several local food and drink lovers to help choose his menu and wine list. Playing on the local theme, the guests were served cakes and breads made in Blaby, cheese produced in nearby Market Bosworth, beer brewed in Leicestershire, local wine and more. Chris says: “We listened to our customers’ ideas on wine and food and this meant they all became very engaged and interested in our booze and cooking! Then they told their friends, who also became keen to visit the pub.”

Next, Chris wants to create a small display area where local artisans can show off their wares – things like pottery, jams and chutneys, artwork and more. He is also considering erecting a large noticeboard where local artisans can advertise their services. “You’ve got to keep changing and improving all the time,” he says. “I’m also planning to add an outside dining area.”

As far as Chris is concerned, success has come from creating a buzz around his pub among the local community. “We’re The Baker’s Arms, and the baking theme came naturally from our old bread oven. But if you’re The Blacksmith’s Arms, for example, and have an old shed in the back yard, why not get a local farrier to shod horses there for penny rent? Or allow the building to be used for making pottery, or metalwork. Then the pub gains a new, additional focus, becomes a hub, and more people stop for a pint.

“As time has gone by we’ve had to make less effort to make the artisan-local approach work; it has started to fuel itself. People are very much into the idea of local ingredients and supporting local tradespeople. You can just let the people make you busy. It’s a wonderful thing.”

“We source locally from artisan producers.” The meaning of this phrase is made crystal clear by the story of The Baker’s Arms. And after reading Chris’s comments you wonder why any pub, or local business for that matter, would want to do anything else.

The Baker’s Arms is part of Great Food Club