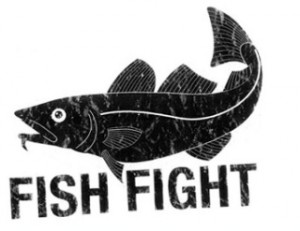 In recent Tweets I’ve been slightly critical of Hugh F-W’s Big Fish Fight and had a small pop at the Hospital Food Fight.

Why, I hear you cry? Surely these are worthy causes.

Well, yes they are, and that’s why I feel guilty. These campaigns have their hearts in the right places – chucking good fish away and carelessly grasping the ocean’s bounty needs sorting; and feeding ill people horrible slop should stop.

No, it’s not the causes themselves that don’t sit comfortably (although it doesn’t take long to think of a few more pressing matters relating to food), it’s… well, a few things, actually…

First, there’s the self-promotion. Call me Mr Cynical, but Fearnley-Whittingstall sailing up the Thames wailing into a loudhailer, followed by his entourage, pongs just ever so slightly. Of fish certainly, but also of a financially fuelled desire to be in the public eye. This is pure speculation as I’ve never met Hugh but my jaundiced eye spots an element of self-interest in Hugh’s holier than thou drum-beating.

Second, there’s a lack of information. This tends to be true of most single-issue campaigns. What are the pros of the fishing quota system (if any)? Why are fish thrown away? Or was current fishing policy dreamed up by a dark overlord bent on environmental destruction? With hospital food, what would actually happen if we spent more time and money making the food better? Where would the money come from? Would nursing standards drop? Balanced argument that takes in the reality of a situation is usually better than shouting. 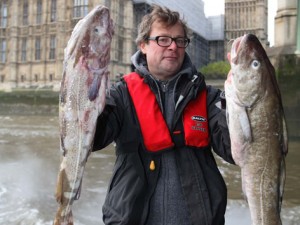 Third, before setting out all guns blazing, there doesn’t seem to be much thought about how the campaign will impact on others. OK, so fishing policy appears – on the surface, at least – to be mad, but what about the fishermen in the developing world who were dropped by Tesco as a result of a Fish Fight film interview? What are we saying here, that fish are more important than people? I guess this was an unseen result of the campaign but it shows that it wasn’t very carefully thought through. 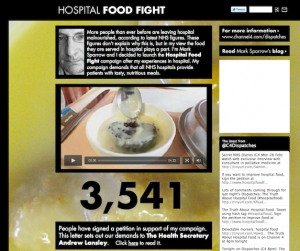 Finally, there’s a lack of perspective. If we start food campaigns every other week then the impact of each is diminished and everyone loses sight of what’s truly important. If celebrity chefs are going enter politics consistently – and I question whether doing so is a good idea – but if they absolutely insist on campaigning politically – then surely they are obliged to present their arguments as someone in politics would. They are also obliged to look at the bigger picture, and I can think of issues more critical than cod stocks, nice hospital breakfasts, or even nutritious school dinners. One is the ever-present issue of people who haven’t got enough food, at home or abroad.

I’m not trying to slate people who are doing something positive and I admire the ballsy campaigning of people like Hugh and Jamie. I’m just questioning whether their food campaigns – and others like them – are having the desired impact and whether they are focused on the right areas.