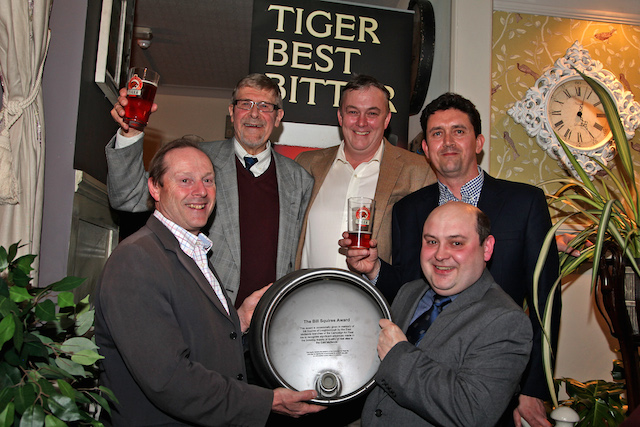 Everards Brewery has won CAMRA’s prestigious Bill Squires Award for its work supporting microbrewers, championing cask ale and reviving pubs. It is the first time the award has been presented in ten years.

The winner of the Bill Squires Award is voted for by local CAMRA branches in the East Midlands. The accolade is very rarely given. CAMRA presented it to Everards in recognition of the brewery’s Project William scheme, where Everards partners up-and-coming microbrewers and ‘cask ale champions’ to breathe new life into closed or previously unsustainable pubs. Project William has led to the resurrection of 29 pubs in the Midlands so far, working in tandem with 10 local brewers. Of those 29, 15 were closed before Everards invested in them. And 17 have gone on to win CAMRA Pub of the Year Awards.

Presenting the award at Nottingham’s Sir John Borlase Warren pub, CAMRA East Midlands regional director Carl Brett said: “We have seen Project William develop and grow right across our region.  We see how this scheme supports microbrewers and gives pub customers a fantastic choice of local ales in pubs that may not still be going without it. Our members felt that this commitment needed to be recognised and we are pleased to present it to Everards.”

Also at the presentation was Morning Advertiser beer writer Roger Protz, who highlighted the fact that cask ale accounts for 65% of Project Willliam pubs’ sales.