Great Food editor Matt Wright has been commissioned to write the main feature in the latest issue of Countryfile Magazine, the sister publication of the well-known BBC1 TV programme.

The seven-page article, which can be found on p16 of the September issue (out now), comprises a food tour of the East Midlands, starting in Melton Mowbray, heading out to the Lincolnshire coast, and then returning to Rutland. 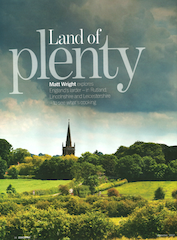 Countyfile editor Fergus Collins writes of Matt’s article: “The feature is a revelation – a glimpse of England of old. It has piqued my appetite for adventure in an area I don’t know well.”