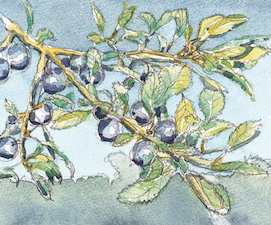 Guide to making your own fruity booze

A dram of sloe gin is the very essence of an autumn afternoon’s foraging. It may be from last year’s crop, or of even older vintage, but that bitter-sweet, intense tang encapsulates the feeling of mellow fruitfulness. Searching along footpaths for those dark, jewel-like berries, minute droplets of autumn dew on their skin, feeling the comforting weight of a hip flask in your pocket – all this defines the beginning of the new season. 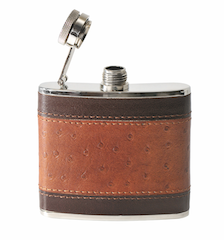 Preserving fruit in alcohol was originally intended as a method of saving some of the glut. It was very quickly worked out that although the fruits were indeed very nice when days were short, they weren’t half so nice as the liquid that had been preserving them. So make a tipsy crumble with the leftovers by all means, but it’s the transformed spirit that will warm your soul, especially on cold winter days.

Sloe gin
So hip flasks at the ready, where do you start? From September onwards, keep an eye on the hedgerows, as competition from both your fellow man and wild beasties for the ripest fruit will be extremely fierce. As well as a full hip flask, you’ll need your wellies, a walking stick and a basket. The stick (a proper, curved-handled one) is most useful as almost all the fruit you’ll find will be just a tad too high, a touch too far over a fence, behind something prickly and generally a bit inaccessible. 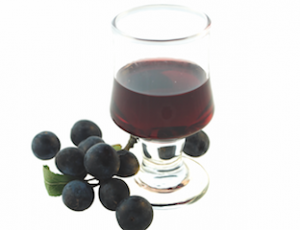 Traditionally you would wait until after the first frost to harvest sloe berries, which means the fruit will be properly ripe from a long hang time on the bush, and the cold will have begun to break down the cellular structure of the berry. If you can guarantee the sloes will still be there, by all means leave it this long, otherwise pick them as late as you dare.

Like a grape, the colour of a sloe is all in the skin, so to get a deeply-coloured gin, that skin must be broken. This can be done laboriously with a pin, traditionally with a blackthorn, or simply by freezing and thawing them so the skin splits naturally. 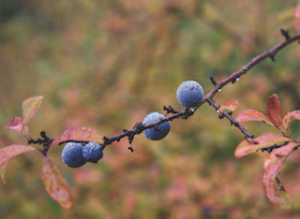 There are two main bones of contention concerning the processing of the split fruit, the main one being how much sugar to use (opinion varies from almost none to as much as twice the weight of fruit), and the other on whether to macerate (meaning to soften or break up) the fruit first or not.

Those in the maceration camp advocate a period with the fruit covered in sugar to ferment and create more complex flavours: this requires rigorous cleanliness of all the equipment, as there is the danger of unwanted bacteria multiplying in the sugar-covered fruit. The process is to fully coat and cover the split fruit with sugar, usually about half the weight of the fruit, and leave in a covered container for as much as a month to ferment. The fruit is then covered in gin in the normal way. This method definitely produces a gin with more depth of flavour, but not of pure fruit flavour. Sloe gin made with macerated fruit is characterised by a more almondy, nutty aroma, and fuller feel on the palate.

Sugar ratios cause big debate, but really you have to follow your own taste. Sugar will add little to the development of flavour, so can always be introduced after steeping of the fruit has finished, and added incrementally to reach the sweetness that best suits you. 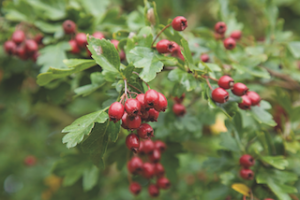 Half as much sugar as fruit is a good place to start for the period of steeping, and is about as little as you get away with if you go down the maceration route. You could use none at all if you fancy a really dry version!

Experiment with different methods until you find the one that best suits you, then you too can argue with the best of them about the proper way to make sloe gin.

Whichever method you choose, put the fruit in a wide-necked jar rather than a bottle for the period of steeping – it will be significantly easier to decant later – and make sure everything is good and clean. Three-quarter fill the jars with the sloes, add sugar (half the weight of sloes for a first try, or have different ratios if you have more then one jar for steeping) and top up with gin.

Put the jars in a cool, dark place to mature (exposure to light will make for a paler, browner drink), and shake every day for the first week, and occasionally thereafter for a couple of months. Reserve the original bottles for decanting back into before serving.

The longer it is left the more married and harmonious the flavours will become, and it will keep indefinitely once taken off the fruit. Realistically you can look forward to drinking it this coming Christmas. From a hip flask while outside on a frosty morning is the perfect way to partake, but out of wide shot glasses in front of the fire is good too. Over ice and topped with tonic, it makes an excellent long drink.

Although sloe gin is the defining beverage, recipes can be adapted for most stone fruit and berries, and all work exceptionally well with vodka as the base spirit. Made with vodka, the drink has a pure fruit quality unmasked by gin’s botanical flavourings.

Quince brandy
If you are lucky enough to have access to some quince, then an excellent alternative to cooking with them is to steep them in brandy. Cut the quince into quite small pieces and dowse in lemon juice – this prevents the flesh oxidising and colouring the brandy, and also adds a bit of zip to the flavour. 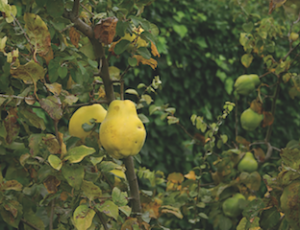 Pop into wide-necked jars, add a quarter of the weight of fruit in sugar, and cover with brandy. Seal the jars and shake until the sugar is dissolved. Leave in a cool, dark place until Christmas, shaking every day for the first week or so, and occasionally thereafter. The finished drink is a rather excellent digestive. 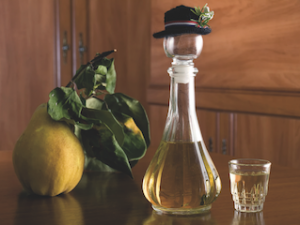 Cheaty autumn liqueur
If you don’t have time, or access to fruits, you can cheat. It is still fairly hands-on, and you still make it yourself, so the quiet feeling of self satisfaction remains. 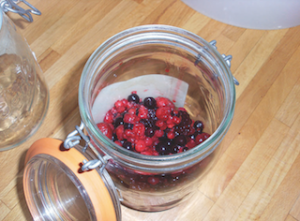 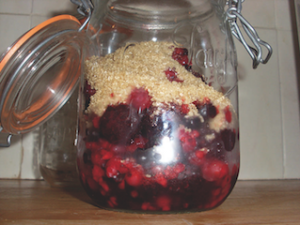 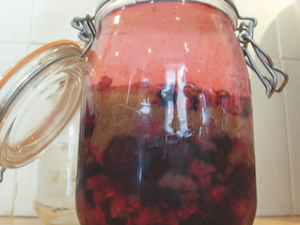 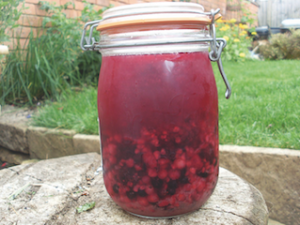 Some farm shops and supermarkets sell mixed frozen ‘fruits of the forest’, which combines redcurrants, blackcurrants, blackberries and others in variable quantities. Simply half fill an empty bottle with the frozen fruit and top up with the spirit of your choice. Fill the now half-empty bottle of spirit with frozen fruit. Sugar can be added to taste. Shake both bottles and leave for as long as you can to steep. Try to leave them at least a week!

Notes on alcohols
Cheap gin uses synthetic botanical flavourings. Why collect fruit only to mask it with ‘juniper flavour’? If well-made gin is out of budget, then cheap vodka is a much better bet. Steeping fruit is not fermenting, so alcohol content does not increase. You have, in fact, diluted the spirit with berry juice and sugar, so the end product can be as little as half the strength of the base spirit. 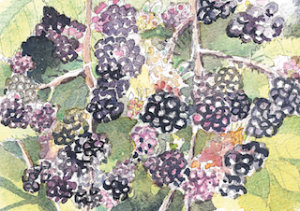