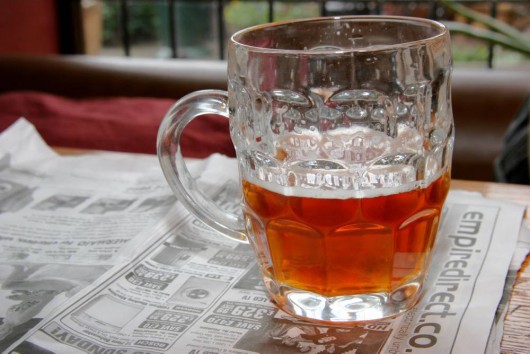 Feeling the heat on a brewing course

Eight of us sat in the room, racking our coffee-soaked, exhausted brains.

“You have one hour, ladies and gentlemen, the clock is ticking,” spoke a voice from the head of the table. “We’ve never been in this position so late on before. We have no plan. We must agree one now.”

“We’ll put it to another vote,” croaked a voice opposite.

It sounds like a scene from Westminster Village – politicians trying to push through critical legislation. In fact, it’s a description of a group trying – desperately, agonisingly – to decide on a recipe and name for a new beer. 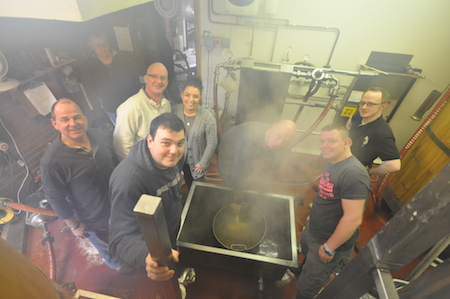 The Gold Course attendees get hot and steamy in the Brunswick Inn’s brewhouse, Derby

The eight of us were on Everards’ Gold Course – a unique workshop designed by the Leicestershire brewer to give its pub tenants and employees unrivalled beer knowledge. Over three days, the course – run by Everards head of quality control Mark Tetlow and head brewer Graham Giblett – teaches you about brewing and beer cellar management, and the main bit involves creating a beer from scratch and brewing it yourself at a microbrewery. You must come up with a beer concept, recipe and name.

And that’s what had stumped us. We’d reached stalemate over what we wanted our beer to look and taste like. Whatever anyone came up with was met with reasons why it wouldn’t work. As a group we were dysfunctional – less use than a chocolate mash tun.

Argument over final product is probably something most brewers and beer marketing teams know well. But for me, this debate was fascinating – the most interesting and challenging part of the course.

I’d thought that designing a beer with a few fellow ale lovers would be easy. But I’d forgotten how hard design by committee can be. I’d also failed to consider that six people on the course would be pub tenants. They were going buy this beer with their own money and sell it to their customers. When cash is on the line, the mind gets sharpened. And for me, this was the beauty of Everards’ Gold Course. It provided insights into the challenges of commercial brewing by posing this question: if you had to put your hard-earned into a beer, what would you brew? 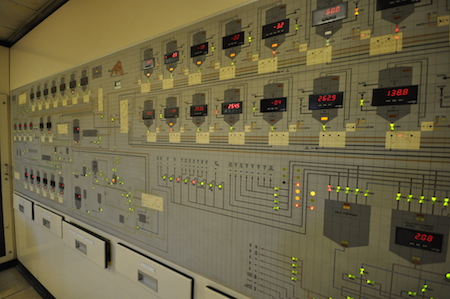 Let me explain. We could have all thought, sod it, let’s have a laugh and brew something crazy, but we ended up in a different mindset. Commercial concerns entered our thinking. Who did we want our beer to appeal to – traditional real ale lovers or more experimental craft beer drinkers? Should it be high ABV (and so rule out drivers), or low ABV to appeal to as many people as possible? Light or dark? Should we risk using speculative ingredients like coriander and ginger? And what about the name and pump clip?

These questions dog commercial brewers day in, day out. Being in that room felt like I was experiencing a microcosm of the beer industry. It’s easy to ask yourself what beer you like to drink. Asking yourself what you’d choose to brew commercially after investing your own money is an entirely different question.

Something else Everards’ Gold Course threw into sharp relief was how passionate people get about beer. No other food or drink product fires folk up so much. Ale lovers have strong opinions about what’s ‘right’ and what’s ‘wrong’. Some say ‘proper’ beer has to come out of a cask. Others argue that true ‘craft’ beer can’t be mass produced. Hops and malt must be well balanced, say one group. Wrong, says another, balanced beers are boring. Bloody hell, this is too bland. Stone the crows, that’s too extreme. And so on.

To a dispassionate observer, this passion must seem odd, especially when you consider that beer is just a drink made with four ingredients – water, yeast, malted barley and hops – combined, heated, cooled and left to mature in various ways. So why does it raise such passions? Now there’s a question.

It might have something to do with the fact that, as we discovered on the Gold Course, from those four ingredients it’s possible to create a final product with infinite variations. You can create an entire spectrum of styles and flavours just by changing what you do with those four ingredients a tiny bit. That’s exciting. And baffling. Add the hops early in the boil and you get a more bitter brew; put them in later and you completely change the aroma. Use heavily roasted malt and you get a darker, more full-bodied beer; use malt that’s been lightly heated and you get a lighter, pale ale.

But as we sat around that table there was more to our indecision than being flummoxed by too much choice, like kids who’ve been given the run of a giant sweet shop. There was passion too. Which led me to question why so many beer lovers get emotionally attached to their favourite drink. I mean, getting fired up about a beverage is odd, isn’t it? Well, not really. 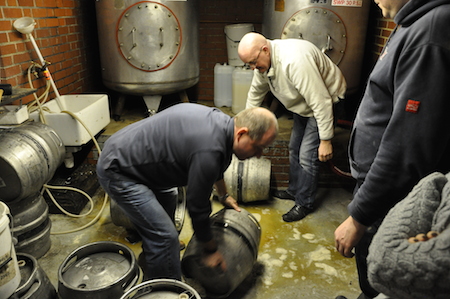 Getting our hands dirty in the Brunswick’s beer cellar

My theory is that over the years we subconciously associate beer with good times, happy occasions, celebrations and friends (if we’re lucky). For that reason it occupies a special place in our minds. Beer punctuates the journey of our lives. From the moment we see dad drinking it when we are little (when we are also amazed at how foul it tastes), many of us start to form a bond with beer, and it becomes important to us.

In the end, after performing many U-turns, we somehow reached a conclusion. Our Gold Course brew would be called Synergy, so named because it’d be the perfect blend of styles and ingredients. It would be a 6% ABV chestnut-brown beer brewed with Maris Otter malt supplemented with wheat, Crystal malt and oats. We would use plenty of Magnum, Summer and Goldings hops, plus some ginger and coriander.

Three days later we reconvened at The Brunswick Inn’s 10-barrel microbrewery in Derby to brew 2,390 pints of Synergy. Under the guidance of Brunswick Brewing Company’s James Salmon, we learnt yet more about beer, this time by getting our hands dirty mashing in the grain and adding the hops.

And the finished product? A very drinkable and interesting beer – 5.6%, moreish, subtley flavoured with coriander and gently warmed by the ginger. It was a little sweet perhaps, but well worth that toe-curling, agonising design-by-committee session.

So next time you criticise a beer because it’s not to your taste, think about its long journey from the farmers’ fields to your glass. Consider the thought and investment that the brewery has put into its creation. Imagine the debates it has fired. Everards’ Gold Course has taught me that there’s far more to brewing than making beers you like to drink yourself. 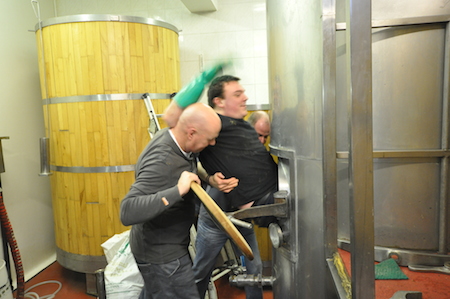 How Everards designs its beers

“We don’t have a formal model for designing our beers,” says Everards head brewer Graham Giblett. “It’s slightly different each time and involves the brewing team, plus the sales and marketing teams. Sometimes we start with a name and sometimes we start with a theme or idea based on market research. But ultimately it’s the head brewer’s decision. As an example, with Whakatu [one of Everards’ limited edition seasonal brews], the sales team suggested we create a light, golden ale that would be reasonably bitter. We used Nelson Sauvin hops from New Zealand, which gave hints of gooseberry and kiwi flavours. The name came about when one of the team, while doing some research, discovered that the Maori name for the region of Nelson where Nelson Sauvin hops originate was ‘Whakatu’.”

Over the years, Everards’ Gold Course has provided a good way for the brewer to experiment with recipes and ingredients. It has even led to some regular Everards’ beers such as Regimental IPA, which began life as an idea brought to the course by beer writer Pete Brown. Pete wanted to recreate an original 19th century Indian Pale Ale recipe that he had discovered. Everards head of quality control Mark Tetlow recalls: “In some ways that Gold Course IPA was a disaster – it was a really nice beer but there were so many hops in the recipe that we only ended up with about two casks out of 40 brewed. The rest exploded due to the sheer amount of hops forcing themselves out of the cask bungs! But in other ways it was a triumph because it led to us honing the recipe and eventually coming up with Regimental IPA, which has been a real success.”