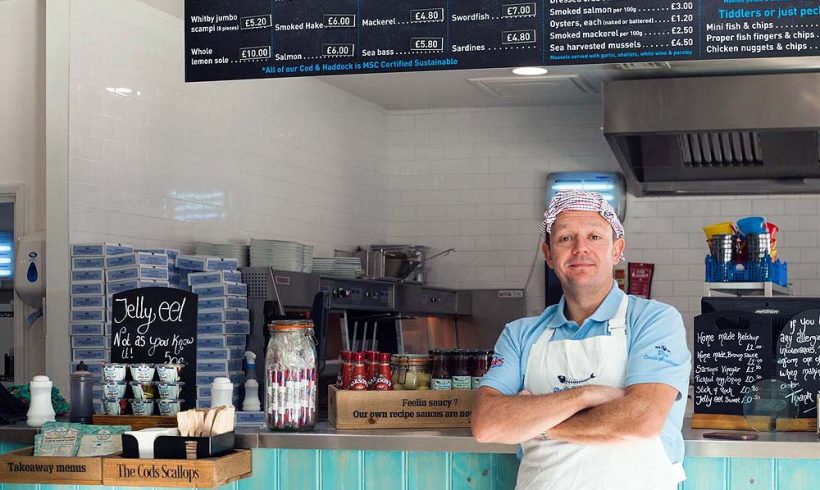 East Midlands chippy The Cod’s Scallops was already riding the crest of a wave following its victory in the National Fish & Chip Awards 2020. A few weeks later in March 2020, it bagged a top prize at the British Pie Awards – for its chicken, leek & ham pie (in the Fish & Chip Shop category). I spoke to John Molnar, owner of The Cod’s Scallops chain of restaurants, at their Mansfield Road fish and chip shop in Nottingham...

From the moment you walk through the door, it’s clear The Cod’s Scallops is no wet fish. Every member of staff offers a ready smile, the perfect side to the mouthwatering plates of fish and chips they serve up six days a week in its four establishments.

It’s a cold Wednesday afternoon in February but the place is warm, bright and buzzing with customers. The menu is extensive with around 20 different species of fish on offer, which are served traditionally battered or baked for a gluten-free, healthy alternative. And all this in a land-locked, urban setting, 70 miles from the coast.

John jokes: “We offer a massive range of fish. My menu is written by my fishmonger. I speak to him more than I speak to my wife.”

John has been in the business for 30 years and knew it was time to apply the same rigorous standards he’d learned in top fine-dining establishments to the fish and chip trade.

“I didn’t understand why you couldn’t go into a fish and chip shop and order some baked bass with chips and some moules marinières to take away,” he says.

That was probably his main motivation for putting him and his team through the gruelling Fish & Chip Awards selection process; the mystery shoppers, the head-to-heads with other top restaurants, the London pitch to 15 industry-leading judges – it’s all been about giving their customers a better experience.

“I entered because it made us a better shop,” John explains. “The little touches that are now second nature. You become a better operator.”

But the success, he insists, is all down to his staff.

“They’re the winners, not me.”

And winners they are. With the UK leading the fish and chip industry, The Cod’s Scallops is arguably the best fish and chip shop in the world.

John takes his obligations as an industry ambassador seriously. They will be travelling to Japan in September to represent the best of the UK on the world stage, and he’s also using the profile to support two charities close to the team’s hearts, The Fishermen’s Mission and Maggie’s Nottingham.

A recent addition, The Top Floor Development is the production and development kitchen where chef Dan Burridge, formerly head chef at Hart’s, works his magic. Everything sold in the restaurants – the pies, fishcakes, fish soup and tartar sauce – is produced on-site, guaranteeing a consistently excellent standard across the shop.

The Top Floor Development has also provided the perfect opportunity for Dan to show his creative flair by offering bespoke private-dining events for up to 24 people. You choose your menu, select your wines from an extensive list and make your Sunday lunch last as long as you like (or your Monday supper or Friday dinner). Dan will cook to your specifications, create a menu from a wishlist of ingredients or influences, or even let you don an apron and join in. It’s all grown by word of mouth but the initiative has been such a success they’ve had to employ a new staff member to handle the bookings. It’s the kind of innovation that will keep John, wife Helen and their team at the top of their game, and The Cod’s Scallops and the UK industry they represent leading the world in fish & chips.

Find The Cod’s Scallops in Sherwood, Long Eaton and Wollaton in Nottinghamshire, and in Market Harborough in Leicestershire.