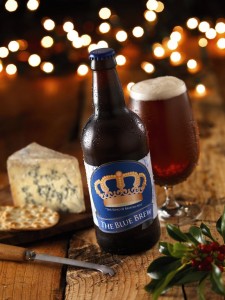 Belvoir Brewery of Old Dalby, Leicestershire, has come up with an ale that contains Stilton cheese.

Called The Blue Brew, it is made by infusing Stilton whey during the fermenting process; it’s chestnut-coloured and said to have a smooth, creamy texture. We haven’t tried it yet but look forward to reporting on the taste.

For the main brew, 25% of Stilton whey was mixed with 75% strong unfermented fresh wort. This was then fermented in the normal way with fresh live brewers’ yeast.

The Blue Brew costs £2.10 per bottle and is available from Belvoir Brewery.