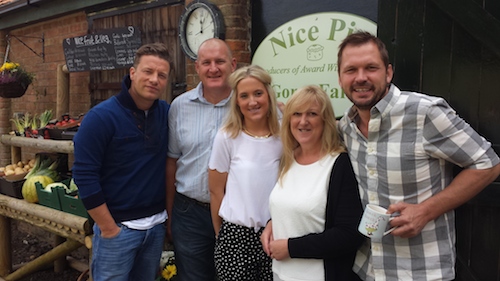 Nice Pie, which runs its farm shop and bakery at Gorse Farm, Six Hills Lane, Old Dalby, is run by Kath and Phil Walmsley, and won 23 awards for its pies in 2014, including several gold medals in the British Pie Awards. 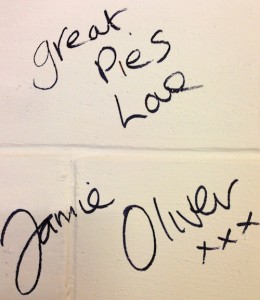 Jamie and Jimmy were particularly interested in Nice Pie’s award-winning squirrel pie and squirrel paté, which it sells alongside other exotic pies like wild hare and blackberry, rabbit in madeira, plus camel, zebra and crocodile pies. Kath and Phil also produce traditional favourites including steak & ale and smoked bacon & mushroom. Having recently become members of the Melton Mowbray Pork Pie Association, they now produce genuine Melton Mowbray pork pies too.

“We showed Jamie and Jimmy how to make squirrel pie,” said Kath, “and we gave them a few tips on how to crimp too.”

Nice Pie offers all Great Food Club members 10% off in its Old Dalby shop. Just show your membership card to claim the offer.