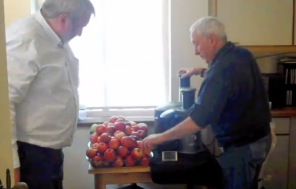 In December we posted this guide to making artisan cider. The method we used in this feature certainly works but is time-consuming and labour intensive. After seeing our guide, Nevin Stewart got in touch to tell us about a method of making cider that he believes is set to become the new standard for DIY producers.

Nevin calls his technique ‘juice and strain’: it is simple and takes advantage of the rapidly improving technology of juicing machines. With ‘juice and strain’ you simply put your apples through a domestic juicer, strain what comes out as it goes into a fermenting vessel, add yeast and hey presto.

Here is Nevin’s video of his method (if this embedded video is not working the YouTube link is here):

Nevin says: “I am mindful that each year in Britain thousands of tons of garden apples ripen, fall and rot or end up on compost heaps. My view is that adoption of ‘juice and strain’ which is low cost, clean and effiicient could reduce this waste.”

One potential problem with ‘juice and strain’ is that putting high volumes of apples through domestic juicers may damage them.

However, Nevin says: “Last year we put 300kg of apples through a relatively low-powered (450W) secondhand Breville JE2 juicer and it was still working well at the end. Since then we have moved up in power rating all the way up to the commercial JE4 (1200W) juicer, which I bought on eBay last Christmas for a song. This machine had been worked hard judging by the wear and staining. However, just eight days ago we put another 70kg of apples through it at 2.5kg/minute. It sang like a bird.”