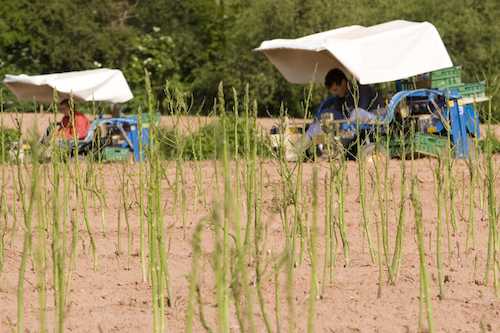 Leicestershire asparagus – herald of the summer

The arrival of asparagus has become one of those events that bookmark the English summer – a few weeks after the Grand National, a few weeks before the strawberries. Precisely when it comes is of course down to the weather, but when it comes, it comes fast.

I spent a sunny May morning with farmer James Ludlam at Cattows Farm in north-west Leicestershire. He pointed at a little spear coyly peaking out of the soil and said: “If it stays warm today that will grow three inches by tomorrow”. 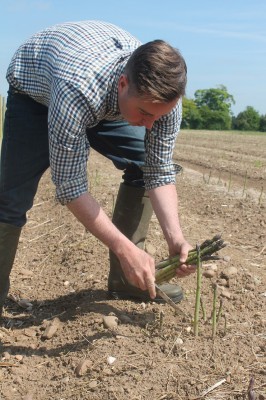 Cattows Farm has a four-acre plot given over to asparagus and its free-draining, sandy soil is perfect for this plant which originated in duney coastal areas. They’ve been growing it for 20-odd years and have gradually increased the crop’s space by ten times as an increasingly sophisticated public get used to asparagus and to the idea of eating seasonally and locally. 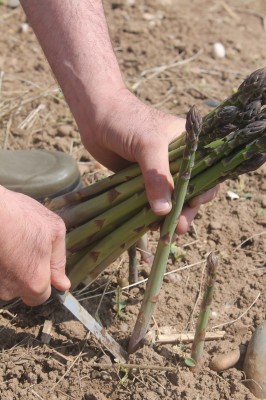 Almost all the crop goes into 400g bundles at Cattows’ smart farm shop or is used in their cafe, which recently held a celebratory eight-course asparagus-themed tasting menu. The rest goes to local greengrocers and to a couple of local restaurants such as The Black Horse in Market Bosworth. “We’re not interested in selling into the wholesale market,” says James. “We prefer to keep control over how it is harvested and sold.”

The spears come up from crowns below ground, which last for around 12 to 15 years and put up 20 or so spears over the course of a six or seven week season. They are individually cut by hand and then sorted on the farm into three grades – thin, medium and thick – before being bound into bunches with rubber bands. After Midsummer Day, the spears are allowed to grow into ferns and to gradually die back over the summer and autumn, providing along the way some excellent cover for pheasants.

For James it’s a nice little crop to fill in during May and to get people used to coming onto the farm in advance of the busy soft-fruit season where he offers pick-your-own strawberries, raspberries and gooseberries. Trimmings also provide fodder for a herd of very well fed Hereford/South Devon cattle. 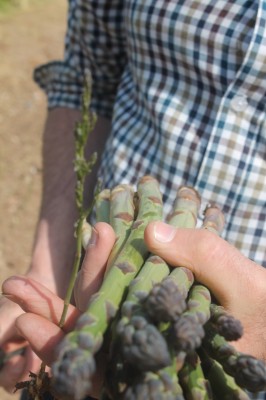 All in all, a lovely story of a great British product being produced and sold on site and consumed locally with relish until it’s gone. If you want to buy Leicestershire asparagus you can visit Cattows, which is well signposted off the road between Heather and Swepstone, and if you’re in need of a recipe visit the British Asparagus website at http://www.british-asparagus.co.uk