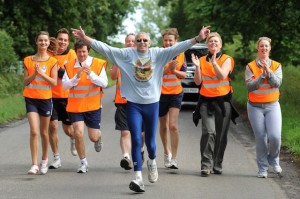 Peter Tinsley, 53, who has worked at Stilton-producing Long Clawson Dairy in Leicestershire for 41 years, has completed his 100 mile run to Stilton, Cambridgeshire, and back raise money for charity and to mark the dairy’s centenary.

Peter, who has lived in Long Clawson village all his life, completed the inhuman challenge over 27 hours, starting and finishing at the dairy over June 17-18.

He was raising money to build a changing room at Long Clawson recreation ground.

“I said I’d run 100 miles when Clawson hit the ton a few years ago and it kind of stuck,” said Peter, who was joined on his run by several colleagues, many of whom ran with him through the night. 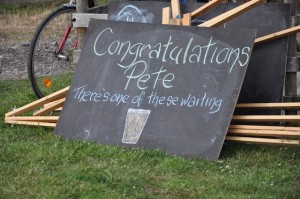 A lot has changed over the four decades that Peter has worked at the co-operative dairy. When he first joined as a 13-year-old in 1970 there were two 1000-gallon milk vats and one 500-gallon container. Now there are nine automatic vats at Long Clawson, each able to hold 4000 gallons of milk.

“There’s a great family spirit at Clawson,” said Peter. “That’s why I’ve worked here all my life and it certainly helped to lift me during the run.”