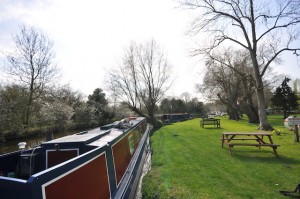 Great Food subscriber Richard Cleaver (@RichardStamford on Twitter) emailed to tell us about a sublime – and unexpected – gourmet boat tour he discovered. He explains..

You might be interested in something I unexpectedly experienced two years ago. My wife and I and another couple hired a 50’s narrowboat on the River Nene from @NeneValleyBoats near Oundle for a long weekend cruise in the middle of the summer – and it turned unexpectedly into a gourmet tour!

Friday night: The Crown at Elton
Sat lunch: cooked on board and dined on the river bank – but could have gone to The Haycock in Wansford instead
Sat night: Orton Hall Hotel on the outskirts of Peterborough (beautiful high-ceilinged Victorian gothic revival dining-room).
Sunday lunch: Ate brunch on the move – but could have stopped off at either The Queen’s Head at Nassington or The Falcon at Fotheringhay.
Sunday night: Oundle Mill (fantastic!)
Monday lunchtime: The King’s Head at Wadenhoe (garden of the King’s Head is pictured above left). 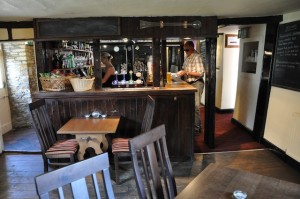 Inside the King’s Head at Wadenhoe

It required us to work about 20 locks, but that helped build up our appetites! What was also amazing was to find places in such rural locations that served food on Sunday evening and Monday lunchtime.

Richard raises money for Macmillan Cancer Support with his devilishly hard quizzes. Look out for them in Great Food Magazine from the Christmas 2012 issue.