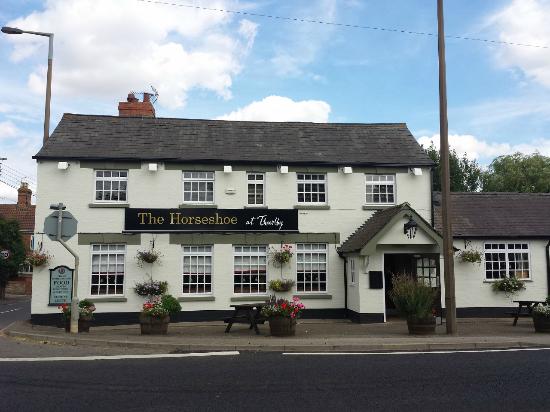 We decided as a family to go for a traditional Sunday lunch at The Horseshoe in Thurlby near Bourne. The building and gardens are impressive, lots of care has been taken on the fairly recent upgrading and tidying up of the surroundings. The lovely, family friendly garden is beautiful on a summer’s day; we enjoyed a pre-meal drink and soaked up the rays. There is also plenty of parking.

The interior is classic, clean and welcoming; the barman was friendly and polite. We were shown to our table and chose our meals. As it was a Sunday, we were all surprised by the good selection on the menu: four different meat roasts, and a vast selection of hearty British home-cooked fare including pâté, a fish salad, and a selection of curries. Our party was varied in age (from four to mid-60s) and there was something for everyone. We didn’t receive a drinks menu, but the bar was stocked with many local and international beers and a few house wines. Nothing for the wine experts here.

The member of staff who arrived to take our order was impersonal and slightly stern, which was a bit of a shame. The adults chose Sunday roasts and steak and ale pie with suet crust. And the children had the brilliant kids-size roast dinners. The food arrived promptly with the al-dente vegetables and potatoes served separately. The veg were fresh and plentiful if a little bland and under seasoned, but most disappointing of all were the charred Yorkshire puddings. The potatoes were served boiled and roasted with the skins on, but not crispy – disappointing. The major plus point was the meat, which was superbly cooked and a nice portion size. Oh and the gravy was tasty too. The steak and ale pie was quickly demolished and given high marks by the conquerer.

The meal would have been more enjoyable if the service had been friendlier; we were not even shown or offered the dessert menu. But these points alone would not stop us from going again. Hopefully next time the Yorkshires will be taken out of the oven sooner and the service will be a little more cheery and helpful. And then I would recommend all to visit this popular pub restaurant.

I have been to The Horseshoe at Thurlby on a few occasions and the food has been brilliant. Yes the veg is a little under-seasoned but cooked to perfection and the Yorkshire Puddings are normally of a great standard. With regards the service, if the server mentioned above is the person I am thinking about, they are not stern or impersonal, just one of those people with a dry sense of humour – we have had a chuckle with them on the few occasions we have been.