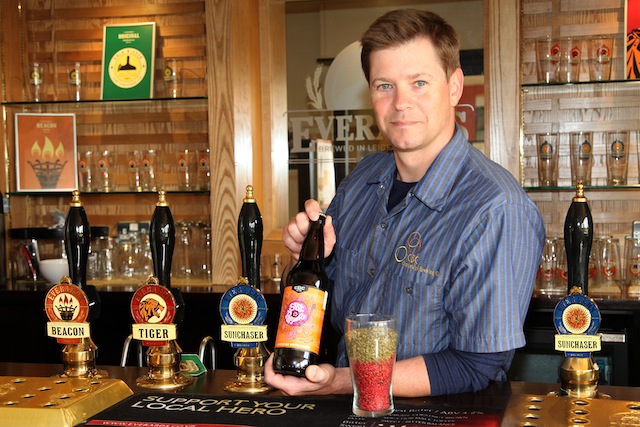 Will Meyers is the award-winning brewmaster at US brewpub and restaurant Cambridge Brewing Company, Massachusetts. He visited Everards Brewery, Leicestershire, in September to brew 81,000 pints of his award-winning Sgt Pepper beer – a 4.2% ‘farmhouse ale’ made with four types of peppercorn.

JD Wetherspoon had flown Will in from the States to brew ale using Everards’ kit for its International Beer Festival, which runs nationwide at its 800+ pubs from October 16-31. For its international festivals, Wetherspoon regularly brings international brewers to the UK to recreate their own beers. Meyers’ Sgt Pepper is one of this year’s chosen brews.

Founded in 1989, Cambridge Brewing Company is the oldest brewery-restaurant in the Boston area and one of America’s first. It specialises in handcrafted original beers such as its Sgt Pepper, interpretations of classics like its Le Saisonniere and experimental brews including Arquebus Summer Barleywine. Will homebrewed his first beer 20 years ago and has since enjoyed a 20-year career at CBC. With all his experience, and with his home nation arguably leading the way in craft brewing, Great Food was keen to chat with him.

Tell us about Sgt Pepper…

“Sgt. Pepper is a complex beer brewed with four types of whole peppercorn – black, white, pink and green. That might sound a lot but we trialled 13 varieties before deciding on those four! The finished beer is 6% in the bottle but for the Wetherspoon festival we’re brewing a 4.2% cask version.

“We first brewed Sgt. Pepper in 2008 to celebrate Cambridge Brewing Co’s 20th Anniversary. A year or two later we entered it into the World Beer Cup and it took a gold medal in the Herb and Spice category. We’ve now turned it into a year-round beer for CBC. It’s great to be brewing it here in the UK at Everards with Graham Giblett [Everards head brewer] and his team.

“Sgt. Pepper is brewed with Pilsner, CaraVienne, and Rye malts, plus Magnum and Spalter hops. But the driving force is the peppercorns. They harmonise with the spicy hops, while the malted rye and our Belgian yeast, which also imparts a spicy flavour, hold down the backbeat.

“I’m a huge Beatles fan so the name was easy!” 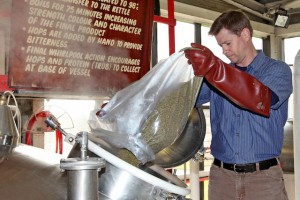 In go the peppercorns!

CBC is a pub and a restaurant as well as a brewery. Is Sgt Pepper good with food?

“All the beers we brew are designed to be great with food. Sgt Pepper is made to be good with steak au poivre or a peppery cheeseburger. It’s dry, rather spicy, and has a balanced bitterness so it’s good with cheeses and charcuterie. It cuts through fats well and is nice and refreshing on the palate. In my opinion good beer is a better pairing with most cheeses than good wine.”

On the Sgt Pepper bottle, beneath the fantastic label artwork, it says ‘Farmhouse Ale’. What does that mean?

“In the US, ‘farmhouse ale’ is synonymous with Saison Ale, which is a Belgian style of fruity, spicy beer traditionally brewed on farms in Wallonia, a French-speaking region of Belgium. ‘Farmhouse’ means it’s a bit rustic and uses a blend of grains like the Belgian farmers would have used.”

America has gone from producing what was widely regarded as the worst beer in the world – light, fizzy, industrially produced lager – to producing what many believe is the best. How?

“Prohibition eventually led to a massively conglomerised beer industry in the US – by the end of 20th century there were three large breweries putting out virtually all of America’s beer. The beer was bland, industrially produced light lager, which was detrimental to the international reputation of American beer.

“In the 60s, 70s and 80s there were many Americans who had travelled a bit with the military, and for work and pleasure. They returned home after experiencing great classic British, German or Belgian beers and couldn’t find any in the US. There was a dearth of beer with flavour. This sparked the home brewing movement, which in turn sparked the professional craft brewing movement. It was and is a small, quiet rebellion against the mono culture of light lager. It’s had a pretty natural trajectory in the US and craft beer is now considered quite mainstream back home. 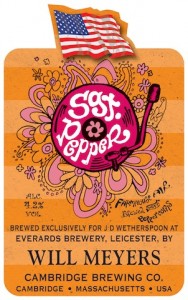 “That said, craft brewing is still responsible for less than 10% of all beer consumed in the US, even taking large breweries like Samuel Adams, New Belgian Brewing Co and Sierra Nevada into account. A thousand new craft breweries are set to open this year in America, and a thousand opened last year.

“There are a lot of people being exposed to craft beer who enjoy the idea of something with flavour, made with people rather than robots and made by local businesses – family-run organisation rather than companies driven by share holders and focus groups.

“The recession has also helped all craft industries. People are now realising, having been fed lots of marketing spiel for decades, that you can’t necessarily trust the large organisations to look after your best interests. Now people are more interested in the local brewer, the local cheesemaker and the local baker rather than the large chains.

“It’s a craft renaisance in general, not just brewing.”

Will Meyers’ Sgt Pepper will be served from October 16-31, 2013, at your local Wetherspoon pub.