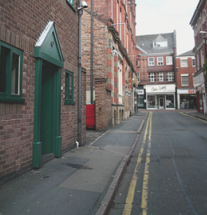 The hardest to find restaurant in the Midlands?

I heard rumours of a great Italian restaurant in Leicester some years ago.

Any decent restaurant in Leicester is a rarity, so I decided to try to find it, first by car.

I was told that it was in the centre and not far from Belvoir Street but no joy. In the end I parked in the Phoenix car park and walked down said street (pronounced ‘Beaver’ in Leicester, not in the French fashion) and looked for the tricolore that might indicate an Italian restaurant. There was absolutely nothing.

In the end I asked a likely passer-by and was directed to a little side street, which I walked down twice without finding anything. I was about to give up when someone burst out of an unmarked green door shouting in Italian on the phone – he didn’t sound happy. I followed him back through the door and found myself in a timewarp.

Pine furniture straight out of the 1970s, odd Italian pictures that most of us remember seeing from early holidays (but sadly no plastic lobsters in fishing nets hanging from the ceiling). Despite all the retro the place was heaving on a Tuesday lunchtime, so I decided to look at the menu.

Here again were the same choices that you might have found when the Great Caruso was in vogue but I noticed that most of the customers weren’t looking at the menus, they were looking at the blackboard or talking to Roberto or Francesco, the guys who owned the place. I got the message.

Roberto has run this restaurant for 30 years, so after I’d checked the blackboard I asked him to bring me some sea bass and quizzed him on how he would cook it. He said he refused to cook the sea bass in any way because the sonofabitchofafishmonger had not sent him the quality of bass that he normally delivered.

In the end I left the choice to Roberto and he brought Scallops Con Spinaci – caramelised scallops in a special sauce with thyme, passatta and double cream. It was absolutely fabulous.

For my main course he chose the ubiquitous Saltimbocca alla Romana. Ubiquitous it may be, but at this place you can see why the original dish became so popular. 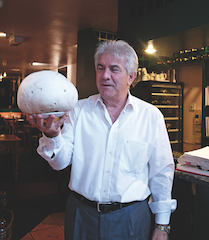 I realised that I still didn’t know the name of the restaurant so I checked on the menu and saw it was known as Casa Romana – a suitably unpretentious name in these brand-conscious days.

The whole place was a opera but I loved it: they filleted fish on the bar but with great expertise, they cared more about the quality of their ingredients than the slickness of customer service, they argued among themselves constantly, but every bit of food looked as though it had come out of a great Italian kitchen, not out of a bag.

Casa Romana in Albion Street, Leicester, was the place I visited. Don’t look for any signs outside to identify it, but if you fancy an antidote to all the formulaic and franchised chain restaurants that litter our towns and cities, then it’s really worth seeking out.

There’s a small photograph below to help you find it. Go through the green door. 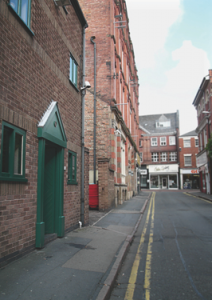