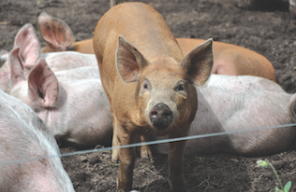 The quest for an honest sausage

When you see the words ‘farm shop’, what springs to mind? A farmer selling what he’s grown on site, or a fancy food shop with no direct link to agriculture? If you read a label stating ‘British-produced bacon’, what should you assume? That it’s been reared on UK farms, or mass-produced abroad and cut in Britain? When you eat a ‘Lincolnshire’ sausage, would you be right in thinking it had been produced in Lincolnshire to a certain specification, or that it had originated somewhere in the EU and contained mechanically recovered meat?

To each question, the second answer is possible and – more often than not – correct. Welcome to the world of food labelling, where honesty is stretched to its limits in pursuit of profits.

In June 2012, Defra rejected an eight-year campaign by the Lincolnshire Sausage Association to give Lincolnshire sausages Protected Geographical Indication (PGI) status. The Association wants to make it unlawful for sausages labelled ‘Lincolnshire’ to be made anywhere other than in England’s second-largest county, and produced to a certain specification. Seems logical, right? Not according to Defra, which – to sum up its 14-page explanation – sees the link between the county and the sausage as too vague to write into law. Defra says ‘Lincolnshire sausage’ has become a general term describing a type of herby pork sausage. 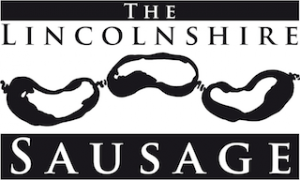 Objections to Defra over the PGI application were raised by several sausage-makers based outside Lincolnshire and by the powerful British Retail Consortium (BRC), which exists to protect the interests of retailers, including Asda, Burger King and Greggs. BRC spokesman Richard Dodd told Great Food: “The vast majority of Lincolnshire sausages are now made outside the county [95%] and to have to call them something else now would be confusing.”

It could, of course, be argued that this confusion has arisen precisely because the term ‘Lincolnshire sausage’ has been abused over the years, and this confusion is, in fact, a good reason to grant PGI status. The Lincolnshire Sausage Association (LSA) takes this view and has lodged an appeal. 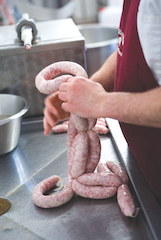 Janet Godfrey, who chairs the LSA, says: “Defra appears to have rejected the application on two main grounds; firstly it claims there is no enduring reputation and link between the Lincolnshire sausage and the county. Secondly it claims the overwhelming majority of Lincs sausages are produced outside the county. We contest these points.”

A trip to the farm…
Redhill Farm Free Range Pork of Gainsborough was named Lincs Producer of the Year 2012. Not only do farmer/owners Jane and Terry Tomlinson raise pigs outdoors on their 185 acre farm, they also produce their own award-winning Lincs sausages, black pudding, haslet and more, right down to the lard used in their pork pies’ handraised pastry. They sell their products directly to the public at county farmers’ markets and from their own farm shop. Not surprisingly, Jane and Terry are passionate about food provenance and honest labelling. Great Food visited Redhill Farm to hear their story and get their view on the Lincolnshire sausage debate. 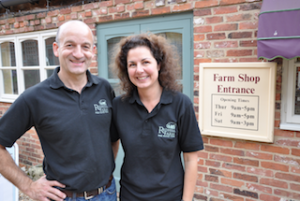 “We’ve been pig farming since 1991 but seven years after setting up, we were forced to change our approach,” says Jane. “We were producing good free range pork and had a contract with a local bacon factory. We embrace costly high welfare standards but the factory cut us off because it was able to import low-grade pork from abroad and classify it as British.”

It was at this point that Jane and Terry made the bold decision to gain more control by producing and selling pork as well as farming pigs. This move added to their passion about transparency and provenance, as well as to their workload. “We were appalled that bacon could be packaged and legally sold as ‘British-produced’ just because it had been cut in the UK,” says Jane. “This is despite the fact it had been produced abroad in a way that would have been illegal in the UK. Not much has changed since then either – food labels are still often misleading.” 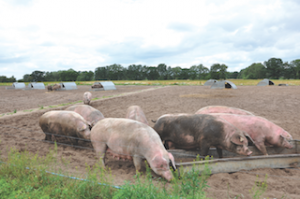 Jane also talks about a local family butcher – “the sort who hangs game in the window” – who she discovered was selling pork produced cheaply overseas. “I was shocked because he gave the impression he was selling high-welfare British pork. It just shows you always need to ask whether the meat you’re buying or eating is what you think it is.”

For Jane and Terry, it’s about simple honesty. “We have no problem with cheaply produced meat as long as it’s labelled correctly,” says Jane.

Money is behind the misleading of consumers, says Terry. “High-welfare farming increases pork production costs by 20p per kilo and plenty of sellers, including many supermarkets and butchers, aren’t prepared to pay for it,” he says. So instead of footing the bill, some sellers give the impression their goods are high-welfare using cunning – some might say cynical – marketing. Pictures of friendly farmers on packets, for example, or cleverly placed words giving the right impression. 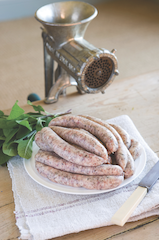 Money talks
Cash is also behind Defra’s rejection of the PGI application, claim Jane and Terry. And with around £650 million a year spent on sausages in the UK, the figures back up their argument.

“I think the BRC was instrumental in blocking the application,” says Jane. “There is too much vested interest,” Terry agrees. “People make vast sums from sausages labelled ‘Lincolnshire’ and they’re not going to let that go.”

So what’s next for Lincolnshire sausages? Jane thinks it will be far from easy for the Lincs Sausage Association to convince Defra to change its mind. “We should have got the PGI but it will be tough to get it now,” she says. “So we need to focus on getting the message out that people who want genuine Lincs sausages should visit the county or buy them online from a good local producer.” 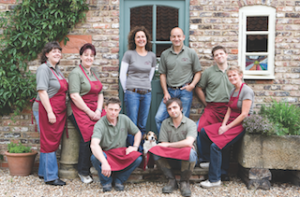 The team at Redhill Farm

Another option is to try to gain PGI status for the term ‘Traditional Lincolnshire Sausages’ in the same way ‘Traditional Cumberland Sausages’ are protected. But this isn’t something Redhill Farm supports. “The word ‘traditional’ has been so abused that it’s almost meaningless on food labels,” Jane says.

In the forest of legal jargon in the Defra report rejecting the PGI application, it’s easy to lose sight that food labelling should be honest and straightforward. That includes Lincs sausages, which should surely be sausages produced in the county, made in the traditional way.