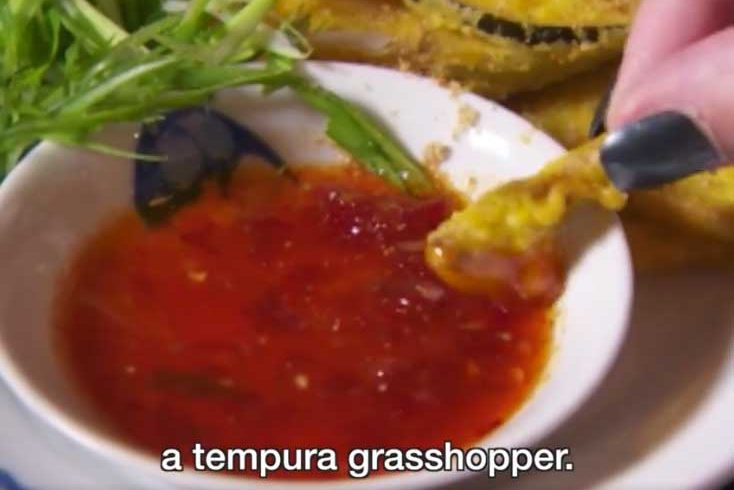 “The worms were a challenge”

It was a Sunday like any other, except it wasn’t, as I was on my way to London on behalf of Great Food Club as a guest of BBC East Midlands’ Inside Out programme to experience a bit of entomophagy (eating insects). Yep. The programme is considering whether we should increase our insect consumption to feed the growing world population and reduce unsustainable farming practices. Insects are nutritious, low in fat and high in protein. They are eaten in many parts of the world and have been for millennia. Whether they can be produced on an industrial scale to provide protein for animals or humans is not yet clear, but in the West – particularly Europe – probably the biggest reason why this cheap and nutritious food is shunned is the “disgust” factor. We generally find the idea of eating bugs pretty revolting, as a certain celebrity reality show clearly demonstrates.

With that happy thought in mind, I joined Mike Dilger (ecologist and TV presenter) at the critically acclaimed Farang restaurant in London’s Highbury Park for their pop-up “Eat Grub” event. Owner Shami Radia is determined to prove that, when prepared well, insects can appeal. To that end he has teamed up with the exceptionally talented chef Seb Holmes (the guy behind Smoking Goat), who specialises in excellent Thai food.

The menu consisted of grasshoppers, crickets and worms, served in Thai street food style and accompanied by drinks with such additions as cricket powder and insect marmalade. We started with a salty snack of Pandan Crickets, followed by cricket flour Miang served in a Betel leaf (with fresh ginger, chilli, peanuts & coconut), tempura grasshoppers, a Som Tham salad with roast crickets and a vermicelli salad with meal and buffalo worms.

I seriously enjoyed the Miang, it had some great chilli flavours. Although I’m not sure how elegant being asked by the producer to eat the not insubstantial serving in one go will look on screen (perhaps they will cut that bit). The tempura crickets had the added frisson of Mike explaining to me that the crunchy bit (think water chestnut) was the “thorax, they have a big thorax”. Thanks, that helped.

The worms were a bit more of a challenge. But I won’t give too much away (that just wouldn’t be cricket). You’ll need to tune in to see how it went. I really enjoyed the experience – I have not eaten insects before (at least not intentionally) and they do offer a unique flavour. However, suffice to say I’m not sure I will be swapping my meat for bugs any time soon.

BBC Inside Out with Abby airs on Monday January 22 on BBC One East Midlands at 7.30pm. Here’s a trailer.