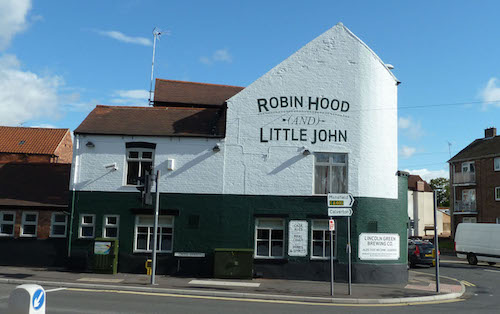 Two Nottinghamshire pubs are proving the ‘traditional boozer’ is still alive, kicking and serving pickled eggs with your pint of mild. These days, of course, the eggs are locally sourced and free-range, and the mild is award-winning and brewed with New World hops, but the fact remains that the traditional wet-led pub model is still full of life, despite media reports to the contrary.

The pubs are owned by Everards and are part of its Project William scheme, where it teams up with local microbreweries to create traditional ale houses that serve an impressive variety of cask beer and cider.

Two words in the last sentence are key to these pubs’ successes: variety and tradition. These elements are central to their growing customer numbers and recent CAMRA plaudits.

The Robin Hood (AND) Little John – a shrine to Arnold’s long-dead local brewery Home Ales – is run by Hucknall’s Lincoln Green Brewery and was shut for 18 months before re-opening in August 2014. It couldn’t be more trad if it tried: while relaxing in the lounge bar, customers can choose between 15 cask ales, select from a ‘cider wall’ featuring eight real ciders, enjoy pub snacks, and even order a ‘beer’ for their dog – a brew called ‘Snuffle’ that comes in beef or chicken flavours.

Chatting to the Nottingham Post, Lorraine Swain, The Robin Hood (AND) Little John’s joint manager, said: “We’ve gone back to the old ethos where pubs are in the middle of the community. We’ve got a lounge room where people can relax, and a bar area. It’s how pubs used to be – making them comfortable for visitors.”

While other pubs are getting rid of their skittle alleys, The Robin Hood (AND) Little John is aiming to open a new one soon.

Lincoln Green Brewery founder Anthony Hughes says: “The traditional pub model is not broken. The most regular comment we hear from locals is: ‘Thanks for giving us a real pub again’. Lots of our customers were lapsed pub goers – they’d got sick of characterless pubs owned by big chains that serve a poor range of drinks, so they chose to stay at home. Give people a nice environment, great customer service and a fantastic range of cask beers and they will go to the pub.”

The Final Whistle in Southwell – operated by Brown Ales of Chesterfield – also has cask ale and a traditional pub environment at its heart. A railway-themed inn (the booth near the bar looks like a first-class carriage and there’s a mock platform on the patio), it serves around 10 regularly changing cask ales.

Dave Brown, co-owner of Brown Ales and brother of The Final Whistle landlord Ollie Brown, says: “We focus on serving really great beer and providing a place where people can meet up and chat. Lots of places try to please everyone and end up pleasing no one. They have a fruit machine, a few lagers, loud music, a few bitters, sport on TV and average food. When planning the pubs with Everards, we said we don’t want a gaming machine, we don’t want a TV, we only want a bit of background music, and we only want to offer sandwiches and cold snacks. But we do want to serve over 10 different types of cask beer and we do want to have well trained, efficient and welcoming staff who understand what we are trying to achieve.”

Newark & District CAMRA says The Final Whistle won its award for “consistent beer quality, warm welcome and great atmosphere,” so it looks like Brown Ales is succeeding in its aims.

In the case of both The Robin Hood (AND) Little John and The Final Whistle, it’s clear that customers are returning – and CAMRA judges are swooning – because they find varied, well-kept beer, a certain amount of nostalgia, plus comfort and relaxation in spades. These are strengths that have brought punters flocking to British pubs for not just decades, but centuries. They’re not ideas that have come from teams of rocket scientists or market researchers, and my guess is that they will continue to work for many years to come.