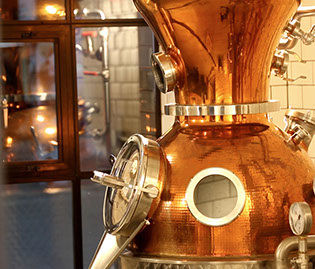 A gin school where you learn how to make your own ‘Mother’s Ruin’ in small desktop stills has just opened near me in Leicestershire. If only mum and dad had sent me here when I was a nipper – I’m sure I would have had a lot of fun! This new ‘school’ is further evidence of the golden age we’re in at the moment for British craft distilling, winemaking and brewing. Never before have so many good quality beers, ciders, wines and spirits been produced by so many small, passionate, independent makers. The school itself is called 45 Gin School and is in Nanpantan near Loughborough; it is run by Jamie Baxter, the master distiller who helped to create Chase gin and vodka.

But 45 Gin School is just the tip of the iceberg in this Great British Booze Revival. According to Drinksint.com, eight gin micro-distilleries are currently open in the UK and 15 more are projected by the end of this year. And that’s nothing compared with the number of vineyards here in Blighty, which now stands at over 400 in England and Wales, with several winning global awards for their sparkling whites and pinks. Which again is a drop in the ocean against the number of UK-based commercial ale producers now operating – a dizzying 1,147 breweries, according to CAMRA.

All in all we’re living through very boozy times indeed, which is something to be celebrated. If you were to ask which drinks from this cornucopia of craft fermenters, brewers and distillers you should seek out, my tips would be gin from Northamptonshire’s Warner Edwards (made on the family farm); sparkling white from Cornwall’s Camel Valley Vineyard and virtually any beer from Shropshire’s Salopian Brewery. Cheers!