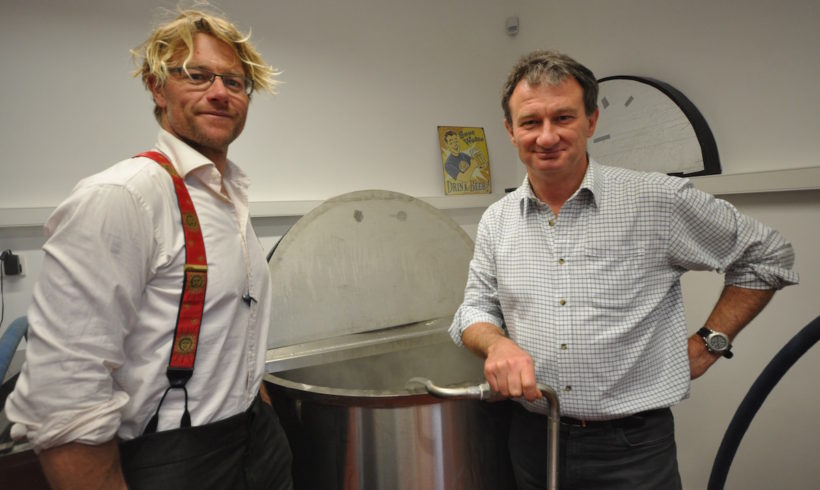 ‘We want to brew the qualities of Stamford into our beer’

The town of Stamford in Lincolnshire is unique. The heritage, the churches, the architecture, the pubs, Burghley House… the list goes on. It’s an inspirational place. And now that inspiration has motivated two local chaps with a passion for good beer to launch Stoney Ford Brewing Co. 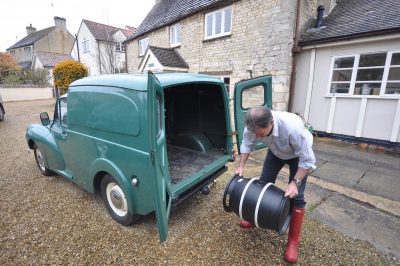 Tim Nicol from Easton on the Hill and Simon Watson from Ryhall were previously ‘shed brewers’, the name given to people – usually men – who like to disappear into the garage or shed to concoct strange liquids of which they are usually unjustifiably proud. After meeting via a mutual friend, this pair decided they had the skills, support and inclination to progress from ‘shed brewers’ to commercial brewers. Tim, a marketer, and Simon, a lawyer, were well placed to go for it, especially seeing as Tim had experience of setting up of a five-gallon ‘teaching brewery’ in Tideswell, Derbyshire, just a few years ago as part of the Taste Tideswell project. Over several meetings that sometimes took place in Easton pub The Blue Bell, the idea for their microbrewery gathered pace. 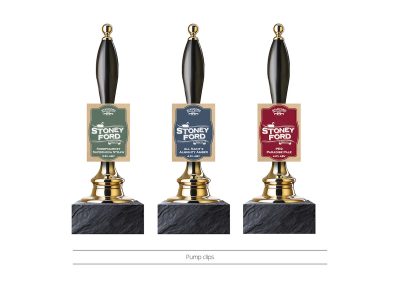 Fast-forward several months to December 2015 and Ryhall residents were surprised when a giant lorry drove into the village. The lorry was carrying a handful of cylindrical metal vessels that had been fabricated in Fort William. It was Stoney Ford Brewing Co’s two-and-a-half ‘brewers’ barrel’ brew kit (720 pints), but a breakdown in communications meant that Tim and Simon had to unload it and carry it into their freshly renovated brewery building (an outbuilding near Simon’s house) without a fork-lift truck.

Since then Tim and Simon have been designing logos (created by Stamford design agency Artisan), honing business plans and brewing – and sampling – lots of test batches of beer. Tim has also invested in a vintage Morris Minor van as a delivery vehicle, while head brewer Simon has attended a highly regarded brewing course in Sunderland and been meticulously getting under the skin of the science of the brewing process as only a lawyer could. The duo have also been brewing with and chatting to other local brewers including Castor Ales, King’s Cliffe Brewery and Baker’s Dozen in Ketton. 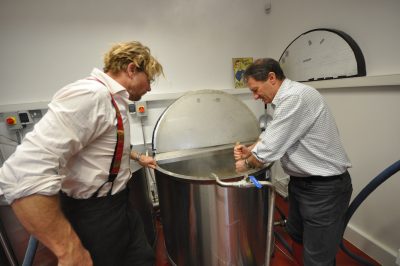 “We’re having lots of fun,” says Tim, “but we’re really passionate about what we’re doing and want to brew outstanding beers. We’re taking it slowly and growing outwards from here in Ryhall and Easton. We’ve already brewed Blue Bell Bitter for the Blue Bell at Easton on the Hill and it received great feedback. Next we’re set to supply the Green Dragon in Ryhall and the Tobie Norris in Stamford, and are having conversations with all the Stamford pubs. We’d love to supply as many as possible and grow from there.” 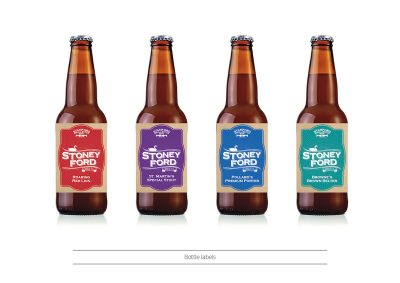 Tim and Simon chose the name ‘Stoney Ford’ because it is the origin of the name ‘Stamford’ and because the town is their inspiration. “We want to brew the qualities of Stamford into our beer – we want our beers to be unique, characterful, traditional and beautiful, just like the town.”

Tim and Simon’s beers will be made with English hops only and, where possible, malt grown in Norfolk and Lincolnshire. “The trend among many new small UK breweries is to use hops from America, New Zealand and Australia to create hugely hoppy beers. We want to show that you can make memorable, creative, interesting brews using native hops,” says Simon. “Our core pub beers will be quaffable brews that make you want to go back to the bar for more. But our bottled range will be different – more distinctive, stronger and designed for matching with different foods.” 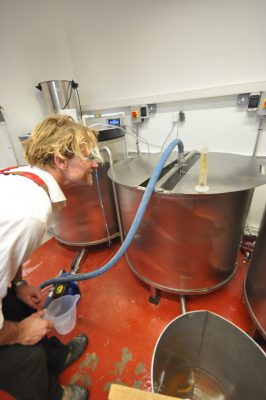 Many years ago, Stamford had lots of small, local breweries in and around the town, which served its many pubs. Today the town has just one working brewery – All Saints – but that is owned by Yorkshire’s Samuel Smiths and makes fruit beers mainly for export. It’s great to see local microbreweries like Stoney Ford and Baker’s Dozen of Ketton springing up to supply local pubs. Let’s all support them as much as possible so they can grow and make even more great, local beer.