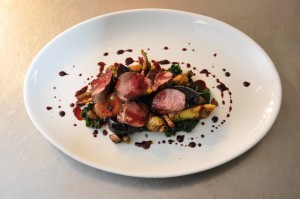 James Goss is head chef at the King’s Arms in Wing, Rutland.

The menu at his pub is firmly seasonal and this venison dish is typical of the fare that James produces: big on flavour, using the best local ingredients, and pretty on the plate.

You can’t just knock this up, though – a certain amount of forethought and preparation is required. Most prep can (and should) be done the day before or earlier, otherwise cooking it might take all day.

However, if you’ve made the stock and roasted the parsnips and beetroot in advance, you’re looking at a quick and easy yet posh weekend supper. The combination of sweet, earthy and gamey flavours make it a real treat.

Preparation
Reduced stock adds great depth of flavour and is the secret of this dish. Time spent on the stock will pay dividends. Make it with roasted bones – chicken is as good as any unless you’ve butchered the deer yourself, in which case deer bones will be perfect. Layer the bones up tightly in a large pan with a couple of chopped carrots, two chopped celery sticks, a quartered onion, six peppercorns, a few cloves and two or three bay leaves. Top up with three or four litres of water. Boil and simmer, reducing to 400-500ml, which will take several hours. In this state it should set to a firm jelly in the fridge. Skim off the surface fat before use.

The parsnips and beetroot are coated with honey, a little balsamic vinegar and oil, and then roasted for about 40 minutes at Gas 4 (180°C) – separately, otherwise you get pink parsnips. These could be done beforehand and stored in the freezer.

The quick bit
1 Coat the loin pieces with oil and salt. Pan-fry the pancetta until it takes a little colour and gives enough fat to fry the venison in. Remove and set aside. 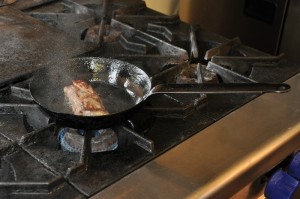 2 Fry the venison over a moderate heat for three to four minutes on each side, and rest somewhere warm while you complete the next stage. 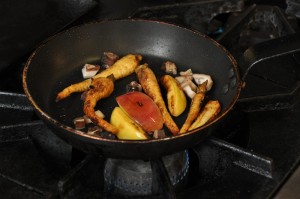 3 De-glaze the pan with a spoonful of stock, and retain. Return the pancetta to the pan with roasted parsnips and apple pieces. Gently sauté until the apple begins to soften and take colour. Glaze with a little butter.

4 Bring a pan of salted and buttered water to the boil and quickly wilt the kale for less than two minutes.

5 Lay the wilted kale on two plates, followed by the apple, parsnips, beetroot and pancetta. Cut the loin pieces into four or five slices and lay on top. Dress with warmed-through stock mixed with the juices given up by the roasting beets.

Where to buy venison…
If you call the King’s Arms, James Goss will be happy to offer advice on buying venison. Or try Bouverie Lodge, a bison and venison farm with an on-site shop located in Nether Broughton, near Melton Mowbray.  Alternatively, ask your local butcher. 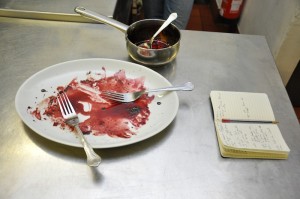 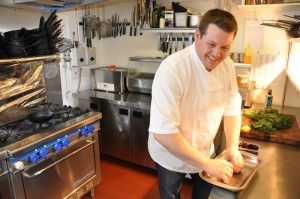