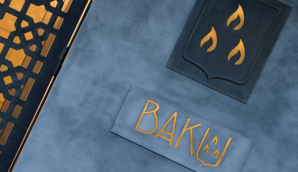 Which came first – the sturgeon or the eggs?

I was recommended to go to Baku in Knightsbridge by a friend close to a rather well known French restaurant guide. He told me that the cuisine was Azerbaijani, which scored high on the novelty front but meant that I had to check the CIA web site to see where the country was and how you spelt it.

The briefing said that it was an old communist state in the Caucasus between Russia and Iran, so I travelled by public transport and wore a fur hat as I walked up and down Sloane Street trying to find oligarchs drinking pepper vodka and eating black bread. I failed to find the restaurant using this method but rang Baku and was told that it was opposite that favourite of the ex-communist rich – Prada.

There was a touch of Le Carre when I found the barely visible sign and entered Baku’s reception. A black-clad concierge checked my name suspiciously and escorted me to a lift. The rather flashy upstairs bar was empty apart from a swarthy gentleman who seemed to know little about the menu or wine but asked many searching questions about me. After deciding that I wasn’t a food spy the man passed me an iPad, which I thought was a generous gift for a new customer but sadly, it turned out to contain the menu. The choice was unlike anything I’ve encountered before and definitely not communist inspired.

The décor was also rather unusual with stained glass and strange abstract sculptures that looked as though they could have been made from pulverised cardboard food coupons. If you like a cross between a Turkish Delight set and a psychedelic dream, this is the place.

We went downstairs to a restaurant that was empty apart from a table of five black-suited gentlemen who looked as though they might have benefited from the oil and natural gas boom in Azerbaijan and were discussing whether to buy a Premier League football club or assassinate someone.

The Mystery Muncher’s cover was safe so I drank my yoghurt and fresh herbs with confidence. The starter of wild partridge tabaka with foie gras that followed was beautifully presented and extremely well cooked.

For the main, we had ordered a fillet of sturgeon to share and should have been warned when the waiter asked twice whether we had had it before. It looked good but the taste was like eating something that had been dragged along the bottom of a polluted lake for ten years before it had been hooked and cooked. It was muddy and crude in taste, which is probably why even hungry people avoided the meat of the sturgeon and resorted to eating its eggs. 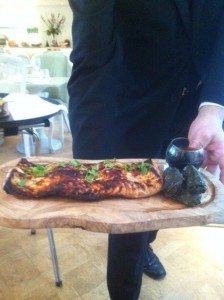 Advice on the wine list was hard to get and I’d hoped that there would have been more good Georgian wines to choose from. We opted for bottles of that region’s red and white and argued about which was the worse.

For dessert I chose blood orange and apricot souffle and my fellow muncher dipped into a rather unusual Azerbaijani version of crème brulee. Both were brilliant.

The amount of money paid would have fed peasants in the old communist bloc for several years but anything in Knightsbridge is hardly aimed at the prolitariat. The Mystery Muncher gladly pays the cost and experiments, so that his readers (few as they are) can avoid food disasters. But, as somebody famous said, “you should try everything once except incest and morris dancing”.

He should have added sturgeon.