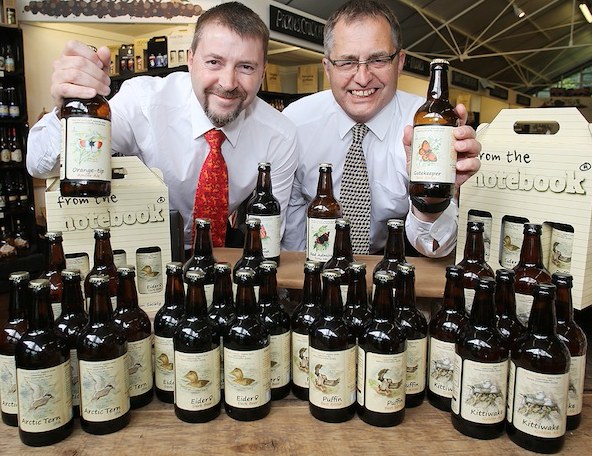 Wildlife beers are a flyaway success

Left: Friends Graeme Denton, left, and Colin Bowler with a selection of their wildlife-inspired beers currently on sale at Brown and Green in Derby Garden Centre.

An East Midlands enterprise has launched its second range of beers, with conservation charities drawing royalties from sales.

From the Notebook was formed last year by friends Graeme Denton of Nottingham and Colin Bowler from Derby, who are passionate about craft beers and British wildlife.

They first dipped their entrepreneurial toes in the water with a seabird series of beers named Puffin, Kittiwake, Female Eider and Arctic Tern.

Now they are spreading their wings with products, launched on June 29, named after butterflies – Red Admiral, Orange-tip, and Gatekeeper. These have been followed by Brown Hairstreak in August, in time for the butterfly’s seasonal appearance. 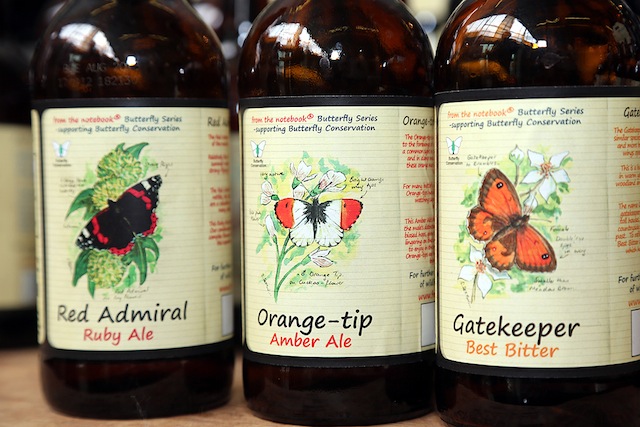 Their unusual idea celebrates the diversity of native flora and fauna by developing beers that relate in taste, colour and attributes to the particular characteristics of the animals or plants they represent. They call this concept ‘Wildlife-Inspired Idiosyncratic Beer’.

So in the case of the Arctic Tern, a feisty bird with white plumage, the beer is a pale ale with a strong, hoppy flavour. Orange-tip has citrus flavours and leaves an orange tang, and Red Admiral is a ruby ale.

The business began when Graeme was holidaying in Northumberland. He saw bird merchandise in shops and enjoyed beer from the local Allendale Brewery. His ‘light bulb moment’ combined these elements.

A cancer biologist who spent most of his career working for Cancer Research UK at Nottingham University, Graeme was made redundant in 2011 and decided to risk money from his payoff on his idea. Colin, an independent financial adviser from Mickleover, who has had a keen interest in butterflies since childhood, joined him in developing the concept and running the business.

The company name is derived from Northumberland wildlife enthusiast Stewart Sexton, who supplements his blog with illustrations ‘from the notebook’. Stewart supplies the artwork for the distinctive labels on the bottles of beer produced by Allendale.

Graeme said that Allendale Brewery was supportive from day one. “They liked the concept and have been extremely supportive, helping us to match the characteristics of the named beers with the creatures they portray,” he said.

Royalties from selling the bottled beers go to wildlife conservation organisations – the Marine Conservation Society in the case of the seabirds and Butterfly Conservation for the new range – to help their work.

So far this fledgling company has produced 8,000 bottles of beer. “Sales are going well in Northumberland, particularly now the tourist season has started.” said Graeme.

“But to our delight the seabird beers have also been selling well in landlocked Derbyshire and Nottinghamshire at specialist beer outlets and delicatessens.”

Now Graeme and Colin hope the butterfly series will hatch success in new markets across the country.

Outlets where From the Notebook beers may be purchased include Brown and Green at Derby and Trentham Garden Centres (members of our Great Food Club network); Liquid Treasure, Belper; The Real Ale Corner, Chesterfield; Hops in a Bottle, Mansfield; and Local Not Global, Chilwell.