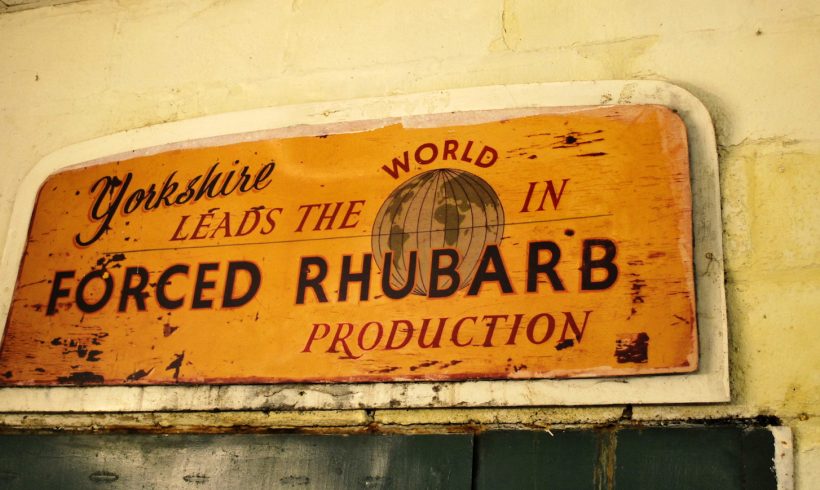 You may have heard of the ‘rhubarb triangle’ – not a place where rhubarb mysteriously vanishes, but an area in West Yorkshire bordered by Wakefield, Rothwell and Morley, where rhubarb is grown in special darkened, warmed sheds and forced to produce early stems between January and March for UK shops. Lit only by candlelight, the sheds house thousands of rhubarb plants, which send out long slender shoots in search of light.

With rhubarb enjoying a revival, off I went for a tour of Oldroyd’s Farm in Carlton, near Wakefield, where, if you listen closely, you can even hear the fast-growing forced plants popping. Forced rhubarb from this area of Yorkshire has been granted Protected Designation of Origin (PDO) status by the European Commission. 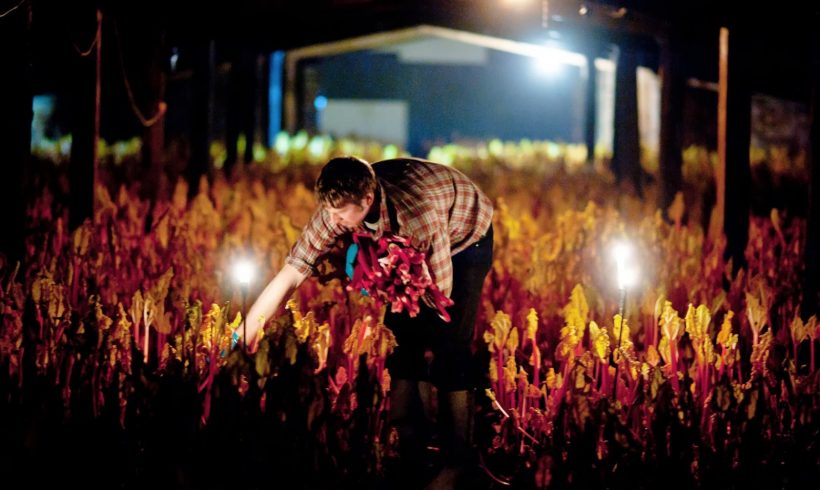 So what is so special about Yorkshire’s pink rhubarb? Forced rhubarb has a sherbet, tangy flavour and a delicate texture. It is a far cry from the tannic-flavoured overgrown outdoor stems used in harshly flavoured school pies and crumbles.

Janet Hulme-Oldroyd, who worked as a scientist at St James’s Hospital in Leeds before joining her late father Kenneth Oldroyd in the family business, explained on the tour how the process of ‘forcing’ rhubarb creates the highly prized crop.

The rhubarb crowns are lifted from the fields in December after they have received the correct number of ‘frost units’. Exposure to frost makes the rhubarb crown break its winter dormancy and stimulate the conversion of starch stored in the rhubarb crown to glucose. This provides energy for the rhubarb to grow quickly without light.

Light discolours and toughens rhubarb and for this reason the crop used to be harvested by candlelight. These days, low electric lights are mostly used. Rhubarb needs lots of nitrogen to grow well and traditionally the fields were fertilised with ‘shoddy’, a by-product of the wool industry. Spreading shoddy reduces the need for synthetic fertilisers as microbes in the soil break down the wool fibres to produce nitrogen. Local textile companies such as Hainsworth’s in Pudsey have been supplying the rhubarb triangle with wool waste for generations.

Odd as it may seem, rhubarb is a vegetable. The plant was originally cultivated for its medicinal qualities including its use as a laxative. Today research is investigating the anti-cancer properties of several active compounds in rhubarb known as anthraquinone – a really interesting and positive bit of news.

From February 8 until March 9 you can book a tour of the rhubarb sheds at Oldroyd’s near Leeds. Well worth a visit. And to taste all things rhubarb, visit Wakefield Festival of Food, Drink and Rhubarb from February 17-19, 2017.