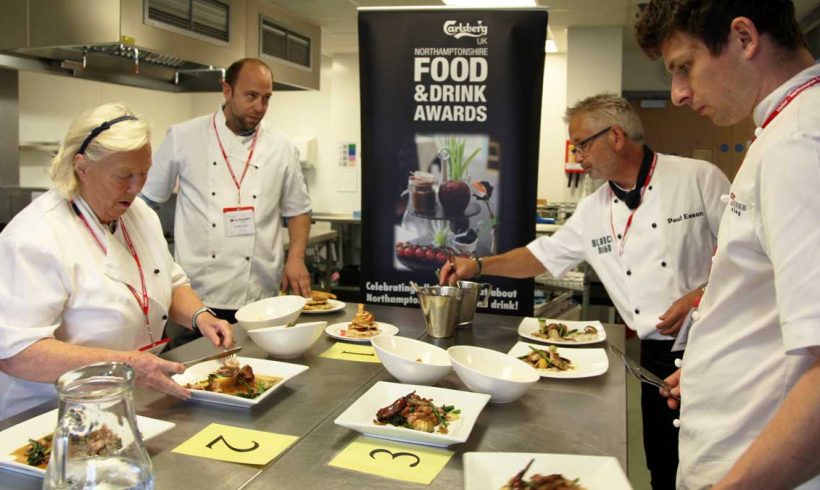 Judges mark the chefs' creations in the Northants Food Awards

Probably the finest chefs in Northamptonshire!

Some of Northamptonshire’s finest chefs have been battling it out to win two of the prestigious titles in this year’s Carlsberg UK Northamptonshire Food and Drink Awards.

The competition, now in its ninth year, is again aimed at celebrating all that is great about local produce and drink, recognising excellence within the county’s dining venues and rewarding those who work so hard within the culinary sector.

The finalists for the senior title are (in alphabetical order):

The four, shortlisted from a record number of entries, were invited to the impressive kitchens of Northampton College to take part in a ‘Ready Steady Cook’ style challenge to prepare two courses. Each were provided with a selection of store cupboard products from Booker as well as their key Northamptonshire ingredients of locally-shot partridge, rapeseed oil from Farrington Oils at Hargrave, rhubarb gin from Warner Edwards in Harrington and beer from Towcester Mill Brewery and Nobby’s Brewing Company in Thrapston.

They were watched throughout the entire three-hour process by an expert panel of judges who scored the chefs before tucking into their dishes.

The second cook-off, also at Northampton College, saw nine of the county’s finest up and coming chefs battle it out. Like their senior counterparts, they too were provided with a basket of kitchen ingredients by category sponsors Booker as well as their local ingredients of Farrington’s rapeseed oil and Northamptonshire Blue cheese from Hamm Tun Fine Foods in Hannington. They were asked to create a street food dish for two people.

The five finalists, who now go forward to compete for the ‘Booker Young Chef of the Year’ title in the final cook-off in September, are (in alphabetical order):

All winners will be announced on Thursday November 15 at the Awards Dinner.

For more details, please call Rachel Mallows on 01933 664437 or email rachel@themallowscompany.com or visit the Awards’ website.