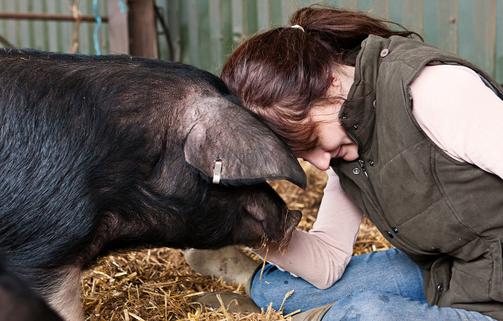 Lou Fitzhugh with one of her prized porkers

Meet Lou – the farmer whose sausages power the Northampton Saints

If she hadn’t been standing at a farmers’ market in Leicestershire, I’d never have guessed Lou Fitzhugh was a pig farmer. So I had to ask her why this tall, slim, attractive 29-year-old had decided that farming was for her. The answer was simple. After coming out of college, Lou knew there were only two sorts of jobs she wanted to do: caring for people or farming. So caring for pigs made complete sense, especially when you see just how passionate Lou is about her animals and products.

Lou’s animals are farmed in Ashby St Ledgers, Northants, butchered and transported by her, with no middlemen and no long unnecessary journeys. She prides herself on knowing they have been bred and reared with care and have experienced the best possible piggy life, stress-free even as they go to the local abbatoir. 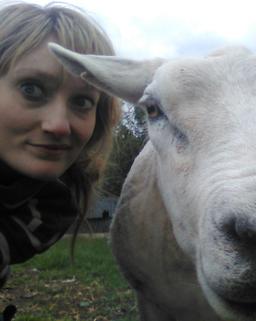 However that was not where it all began. Originally employed as an ambulance technician (the one who drives the emergency ambulances) and then as a prison substance abuse worker, Lou started her business in Crick, Northamptonshire, whilst still employed. She started with just two lambs and two pigs and working a 90-hour week. Something had to go and it was the day job. Lou’s pig herd has now grown to 80 pigs and the sheep flock is catching up, comprising a respectable 40 ewes. Later this year, she and her partner Joe will be taking on a new challenge when they move everything to a new farm near Langham in Rutland.

So what about her products, I hear you say? Well, I can tell you that Lou’s sausages are some of the best I have eaten in a long time. She evidently owns a magic seasoning wand that gives sausages just the right proportion of meat, fat and rusk for perfect cooking and meaty mouthfeel. Lou’s sausages and lamb are so popular that she delivers three times a week to the Northampton Saints Rugby Club to provide the sausages for their post-training fry-up – calorie controlled, of course.

She farms a range of breeds that include Saddlebacks, Berkshire, Pietrain, Large Whites and a breed I’ve never come across, the American Red Wattlehog… named as such because of two dangly appendages on its neck. The Wattlehogs make a great boar-meat sausage but won’t win any beauty competitions.

I asked Lou what she liked most about her job and she said it was “being able to care for her animals from start to finish and know that when she tucks into her favourite pork and black pudding sausages or tells customers about her lamb burgers, it’s all been worth it”.