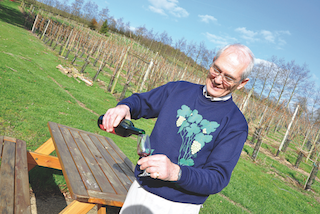 A buzzard swoops against blue sky and the sun shines on a series of vines running down a pretty, two-and-a-half acre, south-facing slope.

It could almost be France but we’re actually on the Leicestershire/Northamptonshire border, at Welland Valley Vineyard in the village of Marston Trussell. And this is by no means the only vineyard in the Midlands, as this map shows. In fact, just seven miles away, another small vineyard – Chevelswarde – is getting set for summer, hoping for a bumper harvest come October. 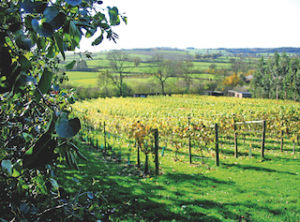 Last year, Great Food visited Chevelswarde in Leicestershire’s South Kilworth and was amazed by the inspirational Ruth and John Daltry, who planted their first vines in 1973 and achieved organic certification in 1975. Now well into their 80s, the couple have recently extended their growing area and are still passionate about English wine. 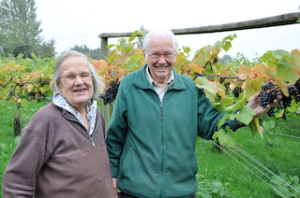 This year, we wanted to shine a light on another local producer, so got in touch with David Bates (pictured above) of Welland Valley Vineyard.

“We English winemakers pray for a warm, dry Wimbledon fortnight,” says David, as he shows us around his small winery. “That’s when the vines flower in this country.” So the year Cliff Richard entertained a sopping Centre Court was bad for English wine as well as English music? “Indeed,” replies David.

“If it’s cold and wet at the end of June then the flowers don’t set well and it reduces your crop.” As David pats his grape press, he points out that most small English vineyards don’t actually make their own wine but simply grow and pick grapes and then take them further south where they are turned into wine by larger concerns. Welland Valley is not one of them – they grow, press, bottle and ferment. 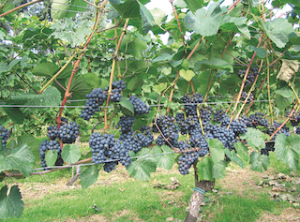 But a soggy Wimbledon is not the only thing to concern the winemakers of Blighty.

“The year is fraught with dangers,” says David. “It starts in May with the threat of air frosts – if you have a warm spring then the vines take off at a great rate, but if frost suddenly bites then they can be cut down in their pomp. Then you’re on tenterhooks during the vulnerable flowering period. And later you’re praying for a warm, dry September and early October, just before the grapes are picked.”

The weather’s one thing, pests are another. “Rabbits and badgers are a real menace,” explains David. “We have to grow our vines high to stop them being eaten, and we keep badgers out with an electric fence. But wasps are the worst – they can devastate the grapes, so we net the fruit to keep them off.”

All in all, it sounds like a great deal of work, and David assures us that it is, working nine to five most days to stay on top of everything. So is it all worth it? “I absolutely love it,” he replies. 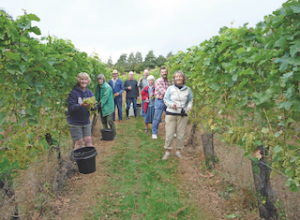 From allotment to vineyard
For David, it all began in 1972 during the home wine-making boom. “We bought a house in Evington in Leicester, and the property came with an allotment, so I started growing vegetables and then decided to plant a few vines. I’d become very interested in wine and thought, why can’t I make it? It became an all-consuming passion, and once you’ve planted your first vine, there’s no turning back. I had a pipe dream that one day I’d plant a real vineyard so when I reached my 50s I thought, it’s now or never.” 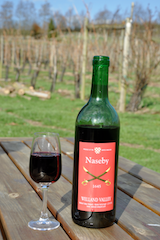 David had to wait until 1992 to find the south-facing slope he needed, eventually buying his field in Marston Trussell after placing a wanted ad in his local paper. “I got one reply from a farmer who was downsizing and, of course, I had to buy the land he was offering!”

But it wasn’t until 2000 when he retired from his solicitor’s job that David started the Welland Valley project full time. “Moving from an allotment to a field was a complete culture shock,” he says. “I turned up with my wheelbarrow and spade and realised it was a totally different ball game.”

Grape expectations
David explains that English wine makers are split into two camps – big businesses dependent on wine to make a living, and hobby vineyards like Welland Valley or Chevelswarde.

“If you want to make good money out of wine-making you need 10-15 acres at least,” he says. “The English wine market has definitely grown – back in the 70s, two-and-a-half acres was regarded as a good-sized English vineyard but now it’s more like 200 acres.” David’s two-and-a-half acres can produce as many as 5000 bottles a year or, after a particularly bad year, as few as 500. An average year results in around 2000.

So are the French and Aussies glancing over their shoulders in fear of English vineyards? “Not exactly, but our sparkling whites are getting a good reputation for their dry freshness. Reds are more problematic – we don’t get enough sun to grow full-bodied grapes, so tend to make reds that are a bit on the light side.”

However, David explains that grape breeders are trying to create new varieties that thrive in less sunny conditions, so there may well be hope for us yet. “I’m a sucker for new grape types,” says David. “If it doesn’t perform then I’ll try something new. I currently grow around 12 different varieties”

Now is the perfect time to forgo your Bordeaux and get local with your vino. You might just be surprised… 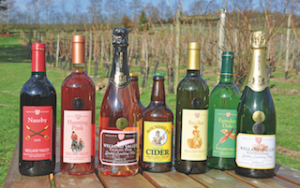 It also produces Naseby, a dry red aged in burgundy oak, made from Rondo and Regent grapes. This is soft, light and easy-drinking, with strong undertones of strawberry. It’s different to the heavy, full-bodied reds we’ve all become used to but quaffing this on a summer’s evening would be perfect.