A visit to Tori and Ben’s Farm, Diseworth 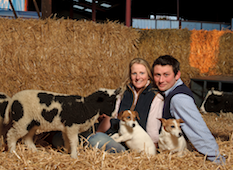 It’s clear that this farm is far more than just a business – it’s at the heart of their lives.

Yet they only took over the tenancy of what’s now known as Tori and Ben’s Farm in April 2010. The day they moved in was, in every sense, the best day of their lives: “We moved in on our wedding night,” says Tori, laughing. “Instead of a honeymoon we came back here, decorated the rooms a bit and had a night in. One of our ewes was expecting, but luckily the lambs didn’t come till the next day!” 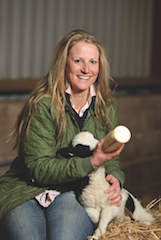 For Tori, taking on the farm was a full commitment to a new lifestyle – when she met Ben she was studying graphic design, so for her the journey to the point where they’re actually running a farm together has been “emotional, hard but incredibly rewarding”.

For Ben, it’s the continuation of a long family tradition – his family has raised rare-breed Longhorn cattle for generations. The breed is native to Leicestershire and renowned for the quality of its meat. To get this quality takes time and effort – Longhorns don’t suit intensive farming techniques, rearing them requires careful breeding and handling. It’s not a road to instant riches, yet for Ben it’s the only way he knows:  “I couldn’t imagine doing anything else,” he says, “it’s such a privilege to work so closely with the animals, doing everything you can to give them the best lives possible.” 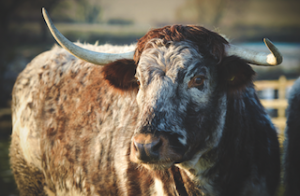 This dedication to animal welfare has paid dividends. Tori has won many prizes for her Jacob sheep and the farm even starred in an episode of The Hairy Bikers, being named ‘Beef Choice for Leicestershire’. The couple sell their produce face to face at local farmers markets and are passionate about the relationships they’ve made – “we’re so lucky, our customers are incredibly loyal,” says Ben.

So how would they describe the taste of the food they produce? “The lamb is full of flavour and very tender,” Tori begins, “and the beef has a nutty, meaty creaminess – it’s hard to describe but we have customers coming back to us saying they’ve never had beef quite like it before.”

Tori and Ben sell at these farmers’ markets..