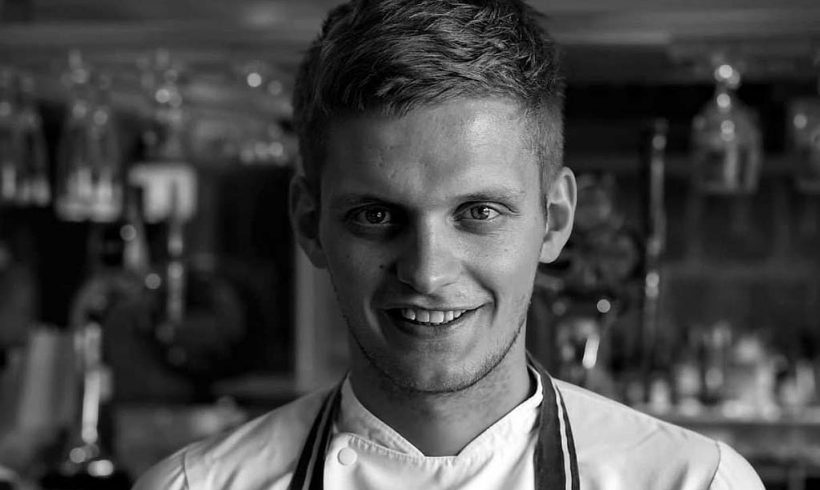 Jacob Robinson has worked with some of the best chefs in the business and his favourite ingredient is a rather surprising one. We managed to catch him for a quick chat…

Can you tell us about your journey to becoming a chef?
“I studied Professional Cookery NVQ levels 1 and 2 at Derby College after I’d left school. During the second year at college, I started working part-time at the weekends at the Dovecote Restaurant at Morley Hayes as a Commis Chef. At the end of my second year at college, I began to work full-time at the Dovecote. Around six months later, I completed my level 3 apprenticeship. A further six months later, I was promoted to Chef de Partie.

A year or so later, I accepted a job offer to join the team at Marcus Wareing’s restaurant in London before heading to Corrigan’s in Mayfair. Then it was back to the Dovecote as Sous Chef for three years, before starting as Head Chef at The Factory Kitchen in October 2019.”

What is your earliest childhood food memory?
“My earliest memories are of Christmas and all the food associated with it. That real palpable energy and tension coming from the kitchen really resonated with me. My family started the day with bacon and sausage cobs, then the main event would always be prawn cocktail starter, or a tin of game soup for me and my twin brother, Thomas. I wouldn’t dream of eating that now!

Then it was, of course, turkey with all the trimmings, then finally a flambéed Christmas pudding. Mum was always mega stressed – there was never enough room on the table. I remember the smell of the crackers being pulled, the posh dinner rolls we only had once a year, and everyone dressed in their new clothes.”

What is your favourite dish to cook for friends and family?
“My girlfriend bought me a pizza oven last year for my birthday. Lockdown proved to be the perfect opportunity to get to grips with it. I love the theatre and suspense of cooking pizzas outside, and trying to get the perfect pizza is something I’m enjoying doing. Pizza always goes down well with crowds of people and it’s always a talking point.”

Who influenced your cooking most?
“My former head chef and friend Nigel Stuart. He taught me that ultimately, food is to be eaten and enjoyed. Sounds obvious – but I think a lot of chefs these days try too hard and don’t think enough about what the customer actually wants. Nigel constantly reminded me of that and it’s something I always think about now.”

Is there a chef you admire most?
“There’s three! Richard Corrigan – he’s an absolutely fantastic man to work for and I loved my time there. He just loves food and hospitality and it’s so infectious. James Cross – chef and owner of Lake Road Kitchen in Ambleside. One of the very few restaurants my girlfriend and I constantly return to. He’s a stellar cook, businessman and leader, and having witnessed this first hand having done a stage there a few years ago, my admiration for him is unwavering. Sabrina Ghayour – I have all her cookbooks and can’t get enough of them, the food is simple and utterly delicious.”

What is your favourite ingredient and why?
“Difficult question so I’m just going to have to go with what has come in to my head first, and that would have to be preserved lemon. The depth of flavour, acidity and savoury saltiness they give to all manner of dishes including desserts are hard to replicate.”

Do you have a favourite cuisine?
“Persian/Iranian. Simple, honest, balanced, interesting and utterly delicious.”

Do you have a favourite restaurant?
“Lake Road Kitchen in Ambleside.”

Food on a Plate or Slate?
“Easy – plate. Slates look great for canapés and things like that, but using a knife and fork on a slate goes right through me.”

What would your last meal be?
“If we’re talking from a purely gastronomic perspective, I’d have to go for turbot, roasted on the bone over fire, with baby artichokes, daft amounts of black truffle, and a sauce I learned to make when I was at Corrigan’s – with Jerusalem artichokes and Sauternes wine. But to be brutally honest, for my last meal I’d swap any food on the planet for a roast dinner with my family. A meal is so much more than just the food.”