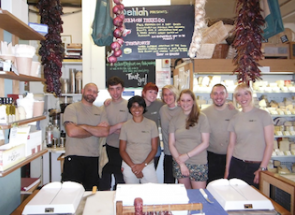 Delilah Fine Foods of Nottingham has been voted Britain’s Deli of the Year 2012.

The deli-café came top out of hundreds of food shops nominated in the 2012 Olives Et Al awards. Thousands of votes were cast by customers and a team of experienced food and retail judges scrutinised each of the 10 regional finalists.

Owner of Delilah, Sangita Tryner, received the Deli of the Year 2012 trophy in London at the Great Taste Awards dinner – an event that celebrates the finest speciality food and drink.

The runner-up in Deli of the Year 2012 was Ultracomida, in Aberystwyth, Wales; and in third place was Bloomfields, in Highworth near Swindon.

Writing about Delilah, a judge commented:“This deli is simply a place where you want to spend a whole day, eating grazing platters, drinking amazing coffee, tasting and choosing, and all the while just listening to the banter of the deli staff – it is THE best fringe food event ever!”