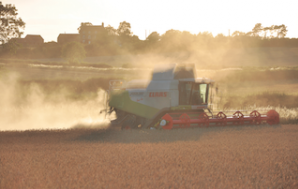 September evening sunlight casts its mellow glow over fields near the village of Car Colston, four miles north of Bingham.

The combine harvester is pursued by a cloud of dust as it scythes through the crop, heading downhill towards St Wilfred’s church. A warm aroma of freshly cut wheat fills the air. With rain forecast in the next few hours, there isn’t long to gather all the Canadian Red wheat – a tall, commercial milling variety that will be sold to make bread. 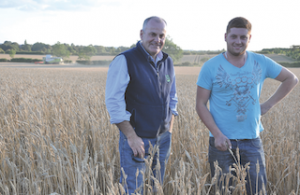 David Rose checks the giant vehicle’s progress. This is his field. David is part of a co-operative of four neighbouring farms called Farmeco, which shares labour and equipment. “We’re squeezing the combining in now before it gets damaged by rain,” he says. “This crop is very thin in the middle because we had a dry early summer. There’s not as much here as we’d hoped, but the rest of our crops will make up for it.” 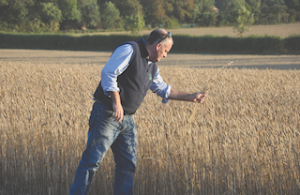 David’s family has farmed these fields for three generations. In 1933 when his grandfather arrived, this was a mixed farm. “He used to deliver milk to the villages, and grandmother sold produce at the local markets,” says David. But times changed. Mixed farms became less profitable and economies of scale were needed, so the neighbouring farms amalgamated to create a larger, more focused business.

Wheat decisions
David explains a little more about growing wheat. He tells me that farmers must decide whether to grow feed wheat – sold as animal feed – or milling wheat – sold to millers to make flour for bread. There are many varieties of each.

“Milling wheats don’t yield as highly as feed wheats. This field of Canadian Red will yield a tonne and a half per acre, while feed wheat would have yielded up to four tonnes.” However, milling wheats fetch higher premiums than feed wheats, so it can be competitive – more profitable, even – to grow them.

But there’s added risk: if your milling wheat isn’t up to scratch – if it’s damaged by rain, for example – then it gets downgraded to feed, and your premium vanishes. As a result, most British farmers stick to growing feed wheat.

But not David, who is passionate about local food and works closely with the Real Bread Campaign. “You have to be sure the premium you will get for your milling wheat is sufficient. And you have to achieve the quality so you give it priority. And the economics are a constant battle because big millers tend to buy wheat from overseas where it often has a better specification due to better growing conditions – and where it costs less, too.” 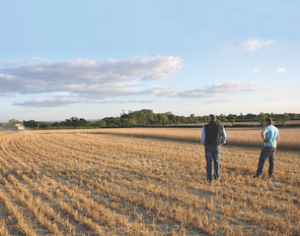 No sleep
If growing wheat in England is challenging then harvesting it is plain nasty. “We were up at 5am this morning and will be going until about 3am,” says Angus Reid, another member of Farmeco. “We often work 20 hour days at this time of year. In the last 14 days, I’ve put in 185 hours.”

His voice is drowned out by the combine – around £240,000 worth – which comes within yards of us, bathing us in a smog of dust. When it’s gone we walk out into the field, crunching the freshly cut stalks. David explains that in an adjacent field he has more wheat growing. “Lots of varieties, all grown together. They mix and become more disease resistant and higher yielding. That enables us to use fewer fertilisers.” 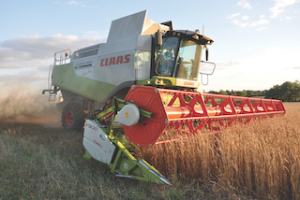 As the sun sets over the fields, the grain is transferred from combine to tractor. Its next journey will be to a mill, where it will be ground into flour.