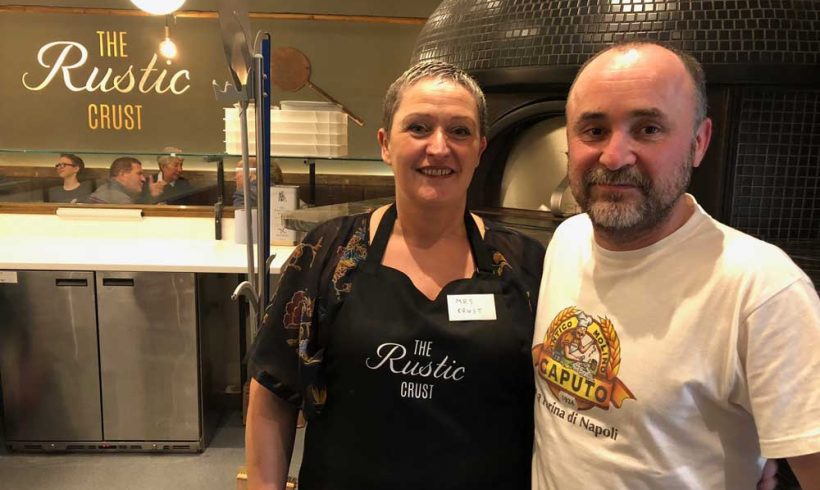 In 2007, Ross and Camille Oliver were the proud owners of a well-used garden pizza oven. Now they run one of the region’s most talked-about new independent restaurants…

During a trip to Rome in 2007, Ross and Camille Oliver fell in love with real pizza. On returning to their Nottinghamshire home, they wanted to create what they’d found in Italy and built a pizza oven in their garden. The journey had begun.

For seven years, family and friends enjoyed Ross and Camille’s delicious pizzas. But the couple were addicted. They decided it was time to share their passion with a wider audience. The Rustic Crust was born.

In 2014, Ross and Camille started serving authentic Neapolitan-style pizzas from a fabulous converted Land Rover Defender called Poppy. They placed a wood-fired oven inside Poppy and took their pop-up pizzas to local events.

Three months later, Ross quit his job as a web designer and Camille left B&Q to pursue their dream.

The Rustic Crust quickly built a fantastic reputation for its pizzas and friendly, professional service. It became a popular choice for corporate events and was soon catering for 50 weddings a year, earning recognition as a regional finalist in The Wedding Industry Awards.

The couple began touring Nottinghamshire, putting on regular pop-ups in the car park of their local pub, The Brown Cow in Mansfield, as well as at Trent Bridge Cricket Ground and Sherwood Business Park in Annesley. The Rustic Crust’s many fans became known as ‘pizza stalkers’, which has become its favourite social media hashtag (naturally, you can now buy #pizzastalker T-shirts!).

With fans queuing for up to an hour to get their pizzas and word spreading, Ross and Camille knew it was time to take the next step. They needed a permanent home.

While plotting the next stage, Ross and Camille forged an exciting partnership with Everards. This partnership – and their hard work – eventually resulted in The Rustic Crust’s new 55-seater, family-friendly pizzeria in Farnsfield, Nottinghamshire. Located in the former Co-op in Main Street, the restaurant opened on March 10, 2020. Until lockdown, they were fully booked every night and receiving raving reviews.

Ross explains: “We’d built a successful business that we wanted to take to the next level. We’d had several offers from other companies wanting to partner us, but they never felt 100% right. But then we met Everards through our local pub, The Brown Cow. We knew them as a local brewery but didn’t realise that they invest in property to house other businesses like ours.”

“Funding the building cost and renovation was our biggest challenge, so we decided to team up. Like us, Everards are an independent business and we share the same values. They purchased the building and assisted with the funding and design to our specification.”

However, as we all know, it hasn’t been plain sailing since opening day. Just ten days after the launch party, the Government ordered restaurants to close. But Ross and Camille, ever the fighters, were determined to carry on, and the innovative pair came up with the idea of DIY pizza kits.

During some weeks in lockdown, The Rustic Crust’s pizza stalkers put in more than 500 orders for pizza kits, which come with step-by-step instructions. The kits have been so successful that they will be available long after lockdown ends.

Dave Pawson of Everards says: “This difficult time has proved what an innovative couple Ross and Camille really are. Their determination has been inspiring. This is why we love working with independent businesses to help them expand and see them grow into the successes they deserve to be. We are delighted to be able to help The Rustic Crust continue its journey.”

Who knows where Ross & Camille’s pizza passion will take them next – but they’ve come a long way since building their garden pizza oven!

A sponsored message from Everards:

If you are looking to take the next step with your business, like Ross and Camille, why not chat to the team at Everards on 0116 201 4260? Or you can get in touch here.