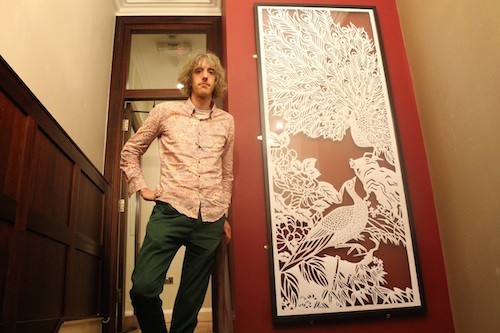 How truly keeping it local makes a real difference

“I walk through Highcross every day – and it is a bit of a double-edged sword”.

That is the admirably restrained response of Phil Sharpe, chef-patron of Leicester’s White Peacock to the continuing arrival of ever-larger chain restaurants in Leicester’s shiny shopping mall.

“It’s great for the economy, but it’s frustrating if it’s going to hoover up so much of the custom. And for such safe and unchallenging food.”

The challenge for independents like The White Peacock, a fine-dining restaurant in a handsome building at the bottom end of New Walk, is to emphasise their difference. To do the things chains can’t or won’t do.

For Phil Sharpe, a key way of doing this is by connecting deeply with the local community, something he’s done since he was head chef at Leicester’s Maiyango. He’s been very supportive of the youth arts charity Soft Touch, running skills workshops for young people on the group’s healthy eating projects and commissioning artwork for the restaurant – including a magnificent stencilled paper peacock by Liam Burts (pictured above left).

“It’s a brilliant project – in fact I think I may end up working in youth work once I’m done cheffing,” says Phil. “When I was 14 my life was totally turned around after I got involved with a youth development charity called Fairbridge Drake – I can’t tell you the difference it makes to have someone believe in you. That’s why for me, it’s got to be all about giving back.”

Another project he has supported for several years is Saffron Acres Community Allotment Project, a charity supporting everyone in the local community – including young offenders – around Leicester’s Saffron Lane to grow fresh produce. This has the double benefit of producing fresh and unusual produce for the restaurant. Allotment holders cannot sell their produce as such, but surplus fruit and veg can be exchanged for donations, and The White Peacock now gets two or three deliveries a week of great, locally grown produce.

“I’ve had to re-train some of my young staff to deal with produce that’s this fresh,” says Phil. “Today I took a parcel of 8.5 kilos of Pink Fir Apple potatoes. The guys were concerned because they were all knobbly, I had to explain that’s how they’re supposed to look!”

Among the goods he regularly takes are herbs, potatoes and greens, but also more exotic produce including melons and even saffron.

“It’s starting to dictate my menus – I cook with whatever’s best at the moment and when it’s gone, it’s gone. It also gives us licence to experiment – when we got some great yellow courgettes in it was a case of ‘right, what can we do with this?’ The quality has really taken us by surprise – to get produce of equivalent quality I’d be looking at Covent Garden or the Paris markets. It’s so much better to support the local community.”

Phil is also now supporting the similar Plot2Pot project run by the city council in New Parks. His dream is get to 80 per cent of his produce from the local community and is now looking at how he can buy lamb direct. All his beef comes through Market Harborough market – he’s tickled by the fact the cows live closer to the restaurant than to the slaughterhouse.

“If there are any high quality local producers out there doing something hand-crafted that we might be interested in, I invite them to get in touch,” says Phil.

At a time when “local” and “seasonal” are such buzzwords, but you still see unchanging year-round menus from the chains, how good it is to see a venue that gives the terms real meaning.

Disclosure – Tim Burke is a volunteer on the management board of Soft Touch.