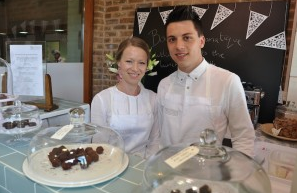 Left: Shelly and Jake Preston behind the counter at Boutique Aromatique in Welbeck Farm Shop

Fine chocolatier and patissier Boutique Aromatique, based at the Welbeck Farm Shop on Welbeck Estate, Nottinghamshire, has scooped a clutch of prestigious awards in recent weeks, culminating in a Gold from the 2013 International Chocolate Awards (ICA’s).

The Gold-winning chocolate – Garden Mint & Sweet Basil – is an original blend created by the company’s founder and head chocolatier Shelly Preston and beat off competition from some of Europe’s most famous chocolate houses. The ICAs also recognised a number of Boutique Aromatique’s other chocolates including Sicilian Lemon & Sweet Lavender and Yuzu, Citrus Paradisi, Tangerine & Pimento Berry – both winning Silver awards.

The Gold medal comes just two weeks after Shelly Preston was honoured by the chocolate industry’s other major awards body – The Academy of Chocolate (AoCs), whose patron is the revered chef Michele Roux. The Academy not only awarded the company three Silver awards for chocolates but also named Boutique Aromatique as a ‘Best Newcomer’.

Both the AoC’s and the ICAs submit entries to a rigorous set of tests including taste texture, finish and innovation. The judging is made up of international chocolate industry leaders, food writers and top pastry chefs.

Shelly Preston said: “In recent years the UK has surpassed France and Belgium as the acknowledged centre of fine chocolate but nearly all the top UK chocolatiers – as well as being men – are based in the capital. It’s not only a thrill to be honoured alongside my chocolate heroes but to have our chocolates recognised in both competitions will hopefully encourage more people to step outside the realms of commercial chocolate and experience our artisan recipes first hand.”

Boutique Aromatique’s chocolates, confectionery and fresh patisserie can be found at The Welbeck Farm Shop in the Courtyard at Welbeck and here.
__________
Welbeck Farm Shop is part of the Great Food Club network.