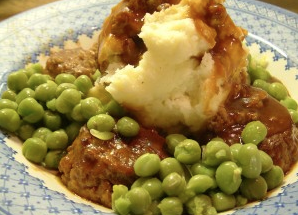 If your hometown is anything like my hometown, butchers shops are an endangered species.

Growing up in the 1980s and ‘90s (in Peterborough, Cambridgeshire) I can remember six or seven butchers shops in and around the city centre – now there is just one. It’s a trend not just limited to Peterborough. In the mid-90s there were an estimated 22,000 butchers shops in Britain. By 2010, this figure had fallen to about 6,500. It’s a sorry state of affairs, also experienced by pubs, greengrocers, fishmongers and more.

But one place where butchers seem to be holding their own is the Black Country. Take a drive through the many connected towns that make up this region of the West Midlands and you’ll see high streets bustling with shoppers visiting independent shops. It’s like taking a trip back in time to the Land Before Supermarkets (even though they are creeping in, ominously).

Cradley Heath is a prime example. On a Saturday morning, locals are out shopping – not at an out-of-town supermarket, but going from shop to shop, chatting with old friends along the way. It’s here you will find the brilliantly named John’s Home-killed Meats. As the name suggests, John Rutter buys all his animals alive and slaughters and butchers them for his well-stocked stall in the ‘little market’ (the central market is bigger, just down the road). 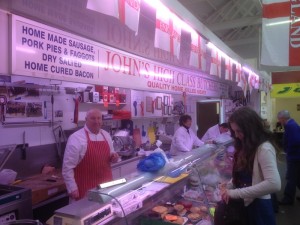 John’s meat is, as you might expect, of the highest quality and his pork pies – baked on the premises by one of his sons – have a cult following. He sold 1,100 in four days last Christmas – that’s a lot of pies (about 34 an hour if my back of a faggot-packet calculations are correct). As well as traditionally cured bacon, pies, chops, faggots and sausages, a big draw to John’s family-run stall are his scratchings. We’re not just talking crunchy pork scratchings, but traditional leaf scratchings, made from the tissue surrounding the kidney, pressed in a ‘wheel’ and baked until crisp. This makes for a softer, flakier, lumpier scratching, which isn’t as strongly flavoured as your regular scratching and quickly sells out. For me, a bag of leaf scratchings is worth the trip alone.

Fewer and fewer leaf scratchings are being sold in the Black Country. Coopers in Darlaston sells them (more here) as does JL Thomas on West Bromwich indoor market.

If you can’t think about pork scratchings without getting a thirst on, may I offer you a pint of Bathams? Brewed by Delph Brewery at the wonderful Bull & Bladder pub in Brierley Hill, Bathams (pronounced bay-thams) Best Bitter is a light, golden, drinkable ale which, at 4.3% makes for the perfect lunchtime pint. The Bull & Bladder (officially named The Vine Inn) is a typically large Black Country pub, serving bitters and milds to a large and loyal set of locals. A must-visit on any trip to the Black Country. 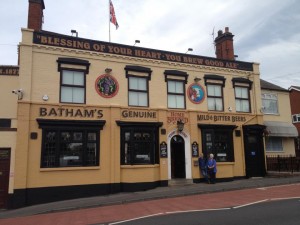 The Bull & Bladder, aka The Vine Inn, Brierley Hill

In a similar vein, The Old Swan at Netherton (known locally as Ma Pardoe’s) is well worth a visit for its home-brewed beers and sprawling traditional interior, comprising bar, smoke room, lounge and other hidden nooks and crannies. But be warned, we visited on a Saturday lunchtime and our faggots, mash and peas took a good 45 minutes to arrive. Next time, I’ll stick to just a pint of mild. 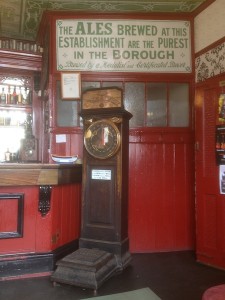 Down the road, in Quarry Bank you’ll find Anthony Jewess butchers, famed for its faggots, which can be bought on their own, or in foil trays along with mash and mushy peas. Proper, rich, meaty faggots – and at a bargain price.

Mushy peas are a Black Country staple, but if you’re lucky you’ll find the traditional grey peas (pronounced ‘gray pays’ round these parts). If Peter Mandelson is said in urban legend to have mistaken mushy peas for guacamole, he would take gray pays for puy lentils. Dried maple peas soaked overnight with pearl barley and then cooked slowly for several hours, gray pays are traditionally accompanied by bacon and are perhaps THE quintessential Black Country dish. 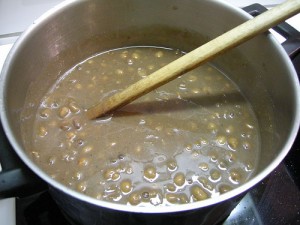 I love the Black Country. Yes much of it is run down, the unemployment rate is high and the locals can look a little rough around the edges, but this is a place of genuine community. Forget your Big Society and your Mary Portas pilots, this is how life used to be – and still is when you know where to look. 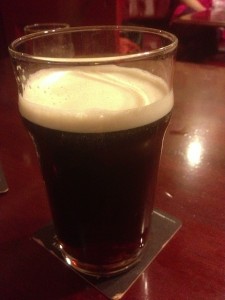 When you’re in one of the Black Country’s excellent butchers, pick up a bag of grey peas, grab some bacon and go home to make this old-fashioned treat.

1. Soak the peas and pearl barley overnight.
2. The next day, drain the soaking water and add the peas to a saucepan, covering with fresh cold water.
3. Bring to the boil, then add sliced onion and turn down to a very slow simmer.
4. Fry the chopped bacon in a separate pan until crisp; add that to the peas; continue to simmer slowly.
5. After three hours, the consistency should be right.
6. Season and serve with a rasher of crispy bacon.

What is the Black Country?
The Black Country is made up of the three boroughs of Dudley, Sandwell and Walsall, as well as the southern parts of Wolverhampton. The name Black Country dates from the mid 19th Century and is derived from the heavy industrial nature – largely metalworking – of the region.

Learn the lingo
Black Country folk are very proud of their dialect – as seen in shops and on billboards around the region. Here are a few words and phrases…

Bostin’ – very good
Alf baerked – stupid
Ow b’ist? – how are you?
Bay too bah – I am not too bad
Ar – yes
Yow – you
Yam yam – a resident of the Black Country, or Wolverhampton