It was a good day for Leicestershire at the 2015 British Pie Awards at the end of April. The Melton Mowbray event is at the top of the pie world’s calender, bringing in more than 100 judges from all over the nation to judge some 830 pies in 20 categories.

Among the Gold Award winners were Old Dalby-based Nice Pie (part of the GFC network), famous for their Squirrel Pie. They showed they are no novelty act by winning the Bride’s Pie section with their Chicken, Champagne & Truffle pie, and also won in the Lamb Pie category with their Lamb Shank Pie.

The Melton Mowbray Pork Pie section was, as one might expect, locally dominated, with Ye Old Pork Pie Shoppe of Melton taking the gold, and Walkers of Leicester taking second and third. Walkers pulled off a clean sweep of the top three places in the Savoury Pie section, winning with the Ploughman’s Pork Pie they produce for Marks & Spencers.

Other Leicestershire award winners included Brocklebys, whose Wild Beaver pie was third out of 71 entries in the Beef & Ale pie category (full disclosure – I was a judge in this category but all the pies were tasted blind).

Meatcure to open in Leicester
There are yet more signs of a lively independent restaurant sector emerging in Leicester to challenge the big brands. Following the relaunch of Crafty Burger at St Martins as a permanent feature at the beginning of May, news comes that the Market Harborough “burger shed” Meatcure is to open a second branch on Highcross Street in Leicester. 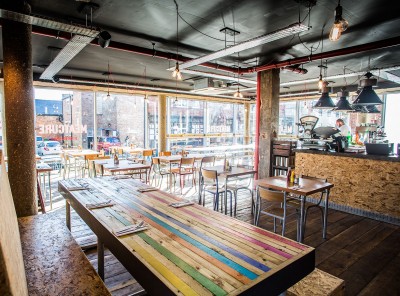 The company grew out of a successful mobile business offering food to festival-goers. Established in Harborough town centre last year, Meatcure uses a range of top local suppliers including 28-day-aged beef from Joseph Morris of South Kilworth, and has worked with local bakers Emerson & West to come up with what they feel is the perfect brioche bun. Their new venue is set to open in June in the refurbished premises of one of Leicester’s less-fondly remembered pubs, which has lain empty for several years. It will be just yards from two national burger chains in Highcross.

Lilu reopens
Slightly further along Highcross Street, the Indian fine dining restaurant Lilu reopened at the end of April after a prolonged closure. The restaurant combines traditional north and south Indian dishes with more unusual ingredients such as ostrich, red snapper and guinea fowl. There is also a local focus to the menu, with dishes such as Bradgate Park venison with a potato and red onion ragout, and Red Leicester naan bread.